In the scope of the multi-part project The City & The Good Life, by Camera Austria and partners for Graz Kulturjahr 2020. 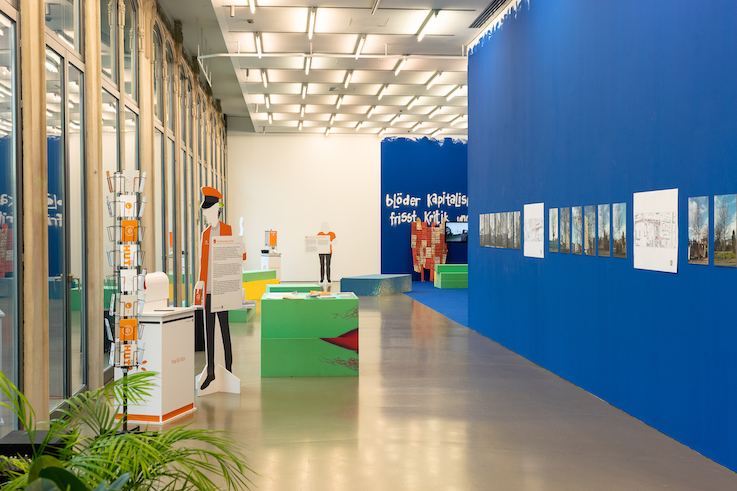 In the “Echoraum” (Echo Space) developed by Nicole Six & Paul Petritsch, the projects carried out in Eggenberg this year between June and October are translated into a presentation for Camera Austria’s interior space—joined by other projects specially designed for these rooms. In a time of crisis, the “Site-Specific (Public) Lessons” continue to be focused on visualizing the foundations of publicness and neighborly environs, which have been deeply transformed over the course of the year 2020. Thus, despite changed circumstances, the intention remains to engage in dialogue with those initiatives that are often barely visible and that are now especially important and endangered at the same time. They shape cultural and social everyday life, the good life in the neighborhood, and thus that in the city as a whole.

Due to construction work for the tram line, around fifty trees had to be felled in the Smart City of Graz’s Eggenberg district, many of which were large, old trees. In order to document this, they were photographed prior to felling. The portraits of the “Smart City Trees” are meant to scrutinize the role played by natural urban greenery and revegetation in modern urban planning, but also to garner momentum for the many different ways of using wood and for possible alternatives to felling trees. The exhibition is accompanied by a postcard series.

As scientific studies have empirically documented, appreciation is a basic human need. Appreciation fuels togetherness in an elementary way and enables peaceful and cooperative coexistence. Because of the heterogeneity inherent to such definitions, disappointments and misunderstandings are inevitable in cooperative relations: if it is unclear what each individual means by appreciation, then she or he most likely cannot fulfill the wish for “more appreciation.” This is why it’s important to talk about one’s own understanding of appreciation, and to help onself and others become aware of how appreciation is experienced, or not.

Petra Lex from the Büro für Pessi_mismus (Office for Pessi_mism) worked together with the inhabitants of the “WALD” neighbourhood (from the street names Waagner-Biro-Straße, Asperngasse, Laudongasse, Daungasse), where the City of Graz is providing temporary housing for people who lost their accomodation. She invited the residents to photograph their favorite domestic spaces. For the opening of “Site-Specific (Public) Lessons,” the resulting photographs were hung on the balconies of the “WALD” neighbourhood in Eggenberg and are now entering our exhibition space as small-format photographs.