Christodoulos Panayiotou
The Invention of Antiquity

Christodoulos Panayiotou
The Invention of Antiquity 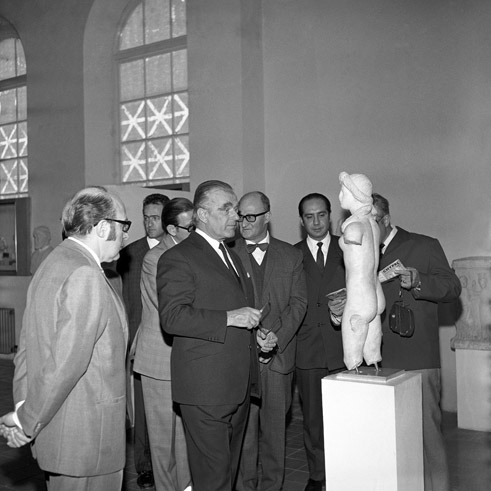 Christodoulos Panayiotou, Detail aus / from: The Invention Of Antiquity, 2011. Image sourced from the Press and Information Office, Cyprus.

In many projects of recent years, Christodoulos Panayiotou has explored mechanisms of identity creation and the construction of publicness through images showing rituals and ceremonies of a theatrical, performative, and collective nature. These pictures originate from various archives in Cyprus, particularly from the time following 1960, the year Cyprus celebrated its newfound independence. In this respect, his photographic series—like “The Invention of Tradition” and “The Invention of Folklore” (2011), but most especially the slide series “Wonder Land” (2008), “Never Land” (2008) and “I Land” (2010)—address the issue of the (visual) construction of national identity.

“Never Land” harks back to the archive of the Cypriot daily newspaper Phileleftheros after a fire in the late 1980s and before the newspaper switched over to digital production ten years later. This ten-year span represents a phase of significant political reorientation for the Republic of Cyprus, especially in view of the intended membership in the European Union (accomplished in 2004). “I Land”, in turn, derives from the archive of the official Cypriot press and information service, which documents the activities of the president and the ministers. Recombined in “I Land” are pictures from the era of the first President of the Republic of Cyprus, Archbishop Makarios III. Alongside such photos, which circulated as official image material, Panayiotou also presents uncaptioned material that has remained in the archive for no apparent reason and may perhaps be attributed to private interests on the part of the photographers.

For “Wonder Land”, Panayiotou selects pictures from the archive of the City of Limassol that show the heightened presence of Walt Disney costumes at public parades. Ranging from the 1970s to 2008, this series uses the photos’ pop-cultural references to trace the shift in referential systems for political and historical narratives under the influence of globalised cultural phenomena and their respective local appropriation.

Emerging from these different image sources is a story—reconstructed narratives, political myths, and attempts at staging nationalism—realigned together with those images that try to elude these attempts. The perception of these pictures accompanies the processes constituting a political public, including how the photos influence the public and operate in an identity-fostering manner. In this sense, this trilogy in particular may be considered exemplary for the way in which representation, politics, and public revolve around one another.

Panayiotou himself speaks of approaching reality as a constant and continual performance, viewing it as a stage hosting narratives of history, identity, and politics—an idea that, however, aims not to fictionalise reality (in a post-modern way) but to turn us all into actors who must assume responsibility for the produced narratives and images.