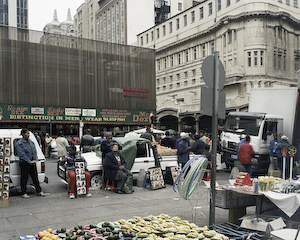 David Goldblatt: Intersections” is produced in co-operation with museum kunst palast, Düsseldorf. Curated by Christoph Danelzik-Brüggemann. A catalogue is available, including texts by Michael Stevenson and Christoph Danelzik-Brüggemann, and an interview with the artist by Mark Haworth-Booth, published by Prestel, Munich-Berlin-London-New York 2005.

In his book The Structure of Things Then, 1998, that looks back on fifteen years of photography work and is an expression and evidence of white, Christian nationalism and Apartheid, David Goldblatt already extensively documented societyshaping forces in South Africa. His photos of factories, housing areas, official buildings, cemeteries, churches, monuments, architectural set pieces such as lights or doors, testify to a country that was deeply influenced by Apartheid ideology right down to the most everyday things: “The smell and taste and touch, and the social weight of things here”, writes Nadine Gordimer. But numerous architectures – barracks, shops, houses, schools, mosques, churches, cemeteries, parks, monuments, signs and quite a few ruins – also testify to the fight for survival and resistance of the black population, their efforts to overcome these ideologies.

With his current group of works, “Intersections”, David Goldblatt leaves behind b/w photography while continuing his investigation of how Apartheid ideology has profoundly influenced the cities and particularly the landscape of South Africa: disused asbestos mines, the fences of the vast landed properties, the infrastructural characteristics that were the foundations of a conquest of nature and oppression of the First Nations.Today, these testimonies of white dominion, testimonies of a tragic history of interventions, are being changed, and yet still they are intimately associated with the Apartheid era: new monuments, the winning back of the cities by black low-wage service providers, the process of restitution of land and the AIDS problem are all-pervasively leaving their marks on the cities and the landscapes. The ”Intersections” in many cases provide astonishing visual evidence of social, economical and political interventions, and, combined with the vestiges of Apartheid, constitute a contradictory geology of South African life, to which David Goldblatt devotes his work.