Elke Krystufek: Responsible for a certain amount of luck

The exhibition will be accompanied by a book with texts by Elke Krystufek. Edition Camera Austria, Graz 2008. 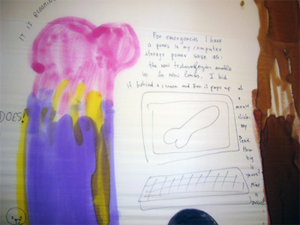 “At this point I would like to draw the viewers” attention to the fact that every exhibition announcement is in fact an apology, an adaptation to circumstances, and a justification, which is why such a semi-public body again takes up a piece of public space. If you are still reading I am sure you want to know: so what is she showing? Are you familiar with exhibition practice? How should I know what I will be showing in autumn? Don’t you live like a midge all summer long, too, and then along comes the question of what happens in autumn? I realise that you can separate art and life like rubbish, then sort it out and throw away the right eyes, and what you throw away gets recycled. (Elke Krystufek)
Elke Krystufek is ruthless with herself and with her environment, serious, always truthful, and always she demands involvement or contradiction from the viewer. To ask the question of “strategies of avoiding calamities” with her, to scrutinise this question as the subject of a contemporary art festival, seems to suggest itself: In view of the complexity of her work and the artist’s desire and courage to not just accept the imprints of collective and individual categories of thought but rather to brush so-called reality up the wrong way, we cannot a priori expect to answer simple questions with simple truths.

Elke Krystufek: Responsible for a certain amount of luck

“Only say the word and my soul shall be healed.” I have some memory of this quotation from when I used to go to church. However, a word is not enough. Nor is psychoanalysis. I always disliked this system because of the couch idea. As far as I am concerned, I would have stood on the old upholstery and spat in Freud’s pipe to put it out and prevent him from getting cancer. I would have blown the coke away from under his nose. I prefer to tell someone about my dreams in bed, lying at the same height and at eye level – you would hardly believe how quickly people get well without unnecessary hierarchies. Nevertheless, as a woman and artist, I am fascinated with what language empowers a woman to do. Language and power – probably neither Mr nor Mrs Canetti would have talked with me when they were alive, and it is no coincidence that my work is peopled by a colony of suicides or people who died prematurely. Or victims of sexual abuse. But the mysterious suicides are not really coincidental after all, and behind my heroines’ so unfathomly endogenous depressions once again lie pyjamas and crime. Male power, so impressive towards the outside, has a lot to hide : the suicides of immigrant workers in Dubai who cannot bear the new architecture because it destroys their living conditions even while it is being built.
At this point I would like to draw the viewers’ attention to the fact that every exhibition announcement is in fact an apology, an adaptation to circumstances, and a justification of why such a semi-public body is taking up a piece of public space again. If you are still reading I am sure you want to know : So what is she showing ? Are you familiar with exhibition practice ? How should I know what I will be showing in autumn ? Don’t you live like a midge all summer long, too, and then along comes the question of what happens in autumn ? In the Styrian Autumn at that ? Why don’t we have a Viennese Autumn or an Autumn in Taipei ? I realise that you can separate art and life like rubbish, then sort it out and throw it away into the right eyes, and what you throw away gets recycled.
I would like to do a survey about whom my art practice has made happy so far and why I was not invited to the exhibition “The Pursuit of Unhappiness”. What is the yardstick for a collector’s happiness ? A gallery owner’s happiness. An art historian’s happiness ? Is the gallery owner who spirits away the accounts happier for his fraud ? Does he deceive himself that he is happy because he is exhibiting at art fairs or is there something gnawing at him beneath his layer of ambition ? Is the art historian happier in my bed or in my art history ? He finds our names so romantic alongside each other on the pages of catalogues, while I do not see the romance in the printed medium, as the female intellect sets quality criteria where the male intellect strives for union. Just to be printed next to each other. Gilbert and George. Do artist couples have children too, and how are they integrated into the production process ? Ilya and Emilia and Olga and Igor Kabakov ? Or like Friedl Kubelka : my mother, my daughter – tamed by the camera… my husband is not there though, and the visible missing people turn the problem into a space before the question mark. My father… ? The patchwork family – someone’s always missing and gets replaced later. Art and romance is refuted by every detail of production in contemporary art production. There is no romantic image-sending – not even the mouse in the click can be seen as romantic : a black, grey or white piece of plastic with no fur. No tits and no tail.
I would like to use my photos, that differ from those of ambitious amateurs only in terms of the special way of seeing things, to decorate prison cells and hospitals so as to make people happier there. Or hang a Gursky for them, to make them feel really small. The art discourse only reaches the border areas and wet areas in the documentation. That way, we can work on you rather than with you. No artist wants to have all of his documented subjects with him throughout his career – the artist pushes the release and leaves his farmers and nudes and homeless people far behind him. The boat people don’t shoot their Bas-Jan-Ader-style travelogues themselves either. I want to write a Bas-Jan-Ader postcard to a woman forced to be a prostitute and discuss the question of happiness : “I am too sad to not have the equipment to tell you.” In truth, only people from the edges of society can explain how they could have avoided the unhappy situation they have got into. We, on the other side of the edge, are capable only of arrogance.

Postscripts : Are smaller galleries happier ? Microloans for mini-galleries ? Are museums places of happiness or merely intellectually enriching, and of what do these riches consist ? In museums, women have the riches of less sexual harassment : visitors look at the pictures, the bottom, the multimedia spectacle, the hair, a sculpture is in the way and the bottom escapes – the visitor, bored, stays behind amidst the artefacts. Young women really are very exposed – they say so themselves, but they manage to escape in the media : two women in wigs go to work on a man with a banana in a performance, but Charlotte Roche also says in her interviews : everyday sexual life is different, and everyone with an everyday sexual life grins to him/herself. Real sexuality is unimpressed by fiction.

In her text and exhibition project “Responsible for a certain amount of luck” Elke Krystufek reacts to the theme of steirischer herbst 2008: “Strategies for avoiding calamities”. As a feminist artist, she questions conditions, particularly those of gender (also in the art industry). In doing so, she turns her own language into material: The media that she has chosen for this exhibition and in which her reflective works are set are, first and foremost, photography and text along with her recent film “A Film called Wood”.