Un-Curating the Archive
Based on a Reference Collection by  Nicole Six and Paul Petritsch
Part I: 1974 – 1989 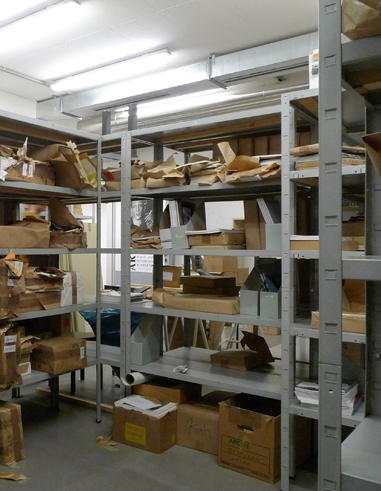 In recent years, a series of artistic positions were present—both in the exhibitions of Camera Austria and in the magazine Camera Austria International—which deal with questions related to the archive. So on the one hand, the point is to imagine archives that do not exist but would be necessary, and on the other, to add something to archives that is lacking, that is repressed or excluded. Our surveying of the Camera Austria archive attempts to bring together these different explorative questions. Is it an archive that could add something not yet present to the established narratives about the relevance of contemporary art photography? What other history might it tell? How could it be brought into association with the idea of the “anti-archive” (Peter Friedl)? And how about the uncomfortable question of what power this archive may hold? Nicole Six and Paul Petritsch have developed a publication concept in which all archival material is presented in the exhibition as a reference collection. The archive is reconquering the exhibition space, yet without becoming a veritable exhibition object. It is leaving the file cabinet in order to expose itself to the question of the topicality of its “truth production”.

In short, we need to describe the emergence of a truth-apparatus that cannot be adequately reduced to the optical model provided by the camera. The camera is integrated into a larger ensemble: a bureaucratic-clerical-statistical system of ‘intelligence’. This system can be described as a sophisticated form of the archive. The central artifact of this system is not the camera but the filing cabinet.
Allan Sekula

The production of a concept is a provocation, a refusal to answer to the call of the known and an opportunity to intensify our experiences. The archive is therefore not representational, it is creative, and the naming of something as an archive is not the end, but the beginning of a debate.
Pad.ma