Thanks to Holding Graz Linien 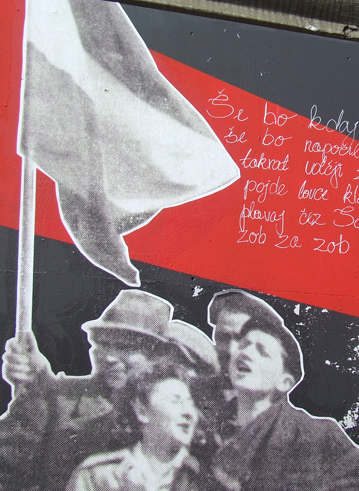 Building on issues raised by Camera Austria during the project “Art Is Concrete” in 2012, “Unexpected Encounters” pursues phenomena of normalisation “after rebellion” and after societal upheaval, where the collective desire for normalisation has given rise to new myths of order, history, and identity. Which pictures are associated with this desire for normalisation? And which opportunities can be devised to delay the naturalisation of these pictures? “Unexpected Encounters” opens up a realm of unexpected exploration of these questions, which may initially be characterised by misjudgements, inappropriate assumptions, and dubious cultural differences.

In the exhibition series “Art Is Concrete”, put on by Camera Austria in co-production with the steirische herbst festival 2012, the focus was trained on questions addressing the relationships among art, truth, and politics. Here art was contrasted as a counter-theory and counter-assertion with the leitmotif of the festival, “Truth Is Concrete”: for it is art—where that which is being produced, shown, negotiated, challenged, concealed, or invented becomes fragile, transient, or even dubious—that ﬁrst and foremost makes a claim to something concrete: a challenge, an imposition, a distur- bance, but also a pleasure, a performance, an act of recognition. It is not because art might be situated beyond power and politics that it emerges as the system of description that is concrete, authoritative, real, genuine, vivid, palpable (all synonyms of the word “concrete”), well before something like truth has a chance to assert re- levance. On the contrary: it is precisely because its stage represents the controversial terrain where meanings about art are construed and negotiated, something that essentially can become conscious (and ultimately represented)—and because the roles, the functions, the arrangement of the various segments of society, history, et cetera, as well as the “whatever« subjects (G. Agamben) are subject to negotiation instead of being presupposed to be ﬁxed—that we are dealing with a space of authoritativeness, of vividness, of reality.
Against this background—and considering the focus on photographic projects—the aim was also to show the extent to which image production, or strategies of representation, does not solely have to involve visuality, and that it cannot primarily be evaluated according to the question of the relationship between picture and “reality”, regardless of the form this takes. If images have always occupied political territory, then it is surely precisely because, as “documents”, they simultaneously set “discourse” into motion, because they are positioned exactly at the junction between what is visible and what is expressible—“a nexus where political, institutional, and social antagonisms play themselves out in the materiality of representation” (W. J. T. Mitchell). The exhibition series “Art Is Concrete” engendered a space that was designed to foster an opportunity to encounter, through representation, the most divergent facets of such materialising antagonisms.

Camera Austria would like to follow up on these explorative questions in the context of the steirische herbst festival 2013: with the leitmotif “Liaison Dangereuses”, the festival is putting up for negotiation the many—necessary? strategic, transitory, precarious— alliances and cooperative relationships that come to life “after the revolution”, with an aim to conceptualise and pursue both artistic and cultural—and, most especially, political—“production” under altered conditions. Which political spaces have now opened up? Which still remain contested or are in danger of quickly disappearing again? Have new players become established? Has the capacity to act newly shifted among the players? Who is starting to write the story of such upheaval, applying it to a new societal order? Which continuities and discontinuities are taking effect? How can artistic practices even succeed in translating the complex political, institutional, and social antagonisms into a materiality of representation? In other words, which role might concepts of representation play?
How can the dichotomy of the question of representation be resolved? The latter question is addressed by the St. Petersburg group Chto Delat as follows: “In the present situation, where anti-representational strategies dominate both within the new political movements and in politically engaged art, it seems that the entire debate is reducible to a clear and simple scheme: representation equals hierarchy and is thus bad. The corresponding antithesis is that a rejection of representation equals the absence of hierarchy and is thus a good thing.” Does the only answer to this question imply departing from the spaces of art to become active “in real life”? Or is it conceivable to transform the spaces of art to make room there for negotiating common affairs?
The title “Unexpected Encounters” is a metaphor for the attempt to convert, over the course of eight weeks, the institutional space of Camera Austria into a realm of unexpected exploration of these questions, which may initially be characterised by misjudgements, inappropriate assumptions, and dubious cultural differences. A number of initiatives and groups from various countries—whose “revolutions” and political/societal upheaval at times dates back over ten years or more—are invited to start developing the format for a transfer in collaboration with Camera Austria:
How can these political issues be transferred into the realm of cultural production without replacing political aspects with cultural ones and thus making them disappear? “How is it, then, possible to produce a critical stance within this context? Moreover, how is it possible to develop emancipatory strategies in the ﬁeld of art and cultural production? Well, there is no simple answer to this question. The contemporary institution of culture is a battleﬁeld, and—to paraphrase Foucault—since there is no power without the resistance(s), each position is an outcome of struggle. What we can do and what we are trying to do is to arti- culate those points of resistance by intervening within the existing constellation. But, criticism as the discursive form of an intervention in the ‘public sphere’ can only be a starting point. Critique—a veritable materialist critique—in order to be efﬁcient, i.e., to produce effects in the material reality of the social exchange, must be practical—it must intervene within and strive to tackle the existing and ongoing social practices” (prelom kolektiv).
Indeed, how can the insistence on deferring the realignment and the discontinuance of options be maintained, which made possible the unexpected spaces of resistance, where the state of exception has already passed and a collective desire for normalisation is giving rise to new myths of order, history, and identity? Which pictures are associated with this desire for normalisation? And which opportunities can be devised to delay the naturalisation of these pictures?