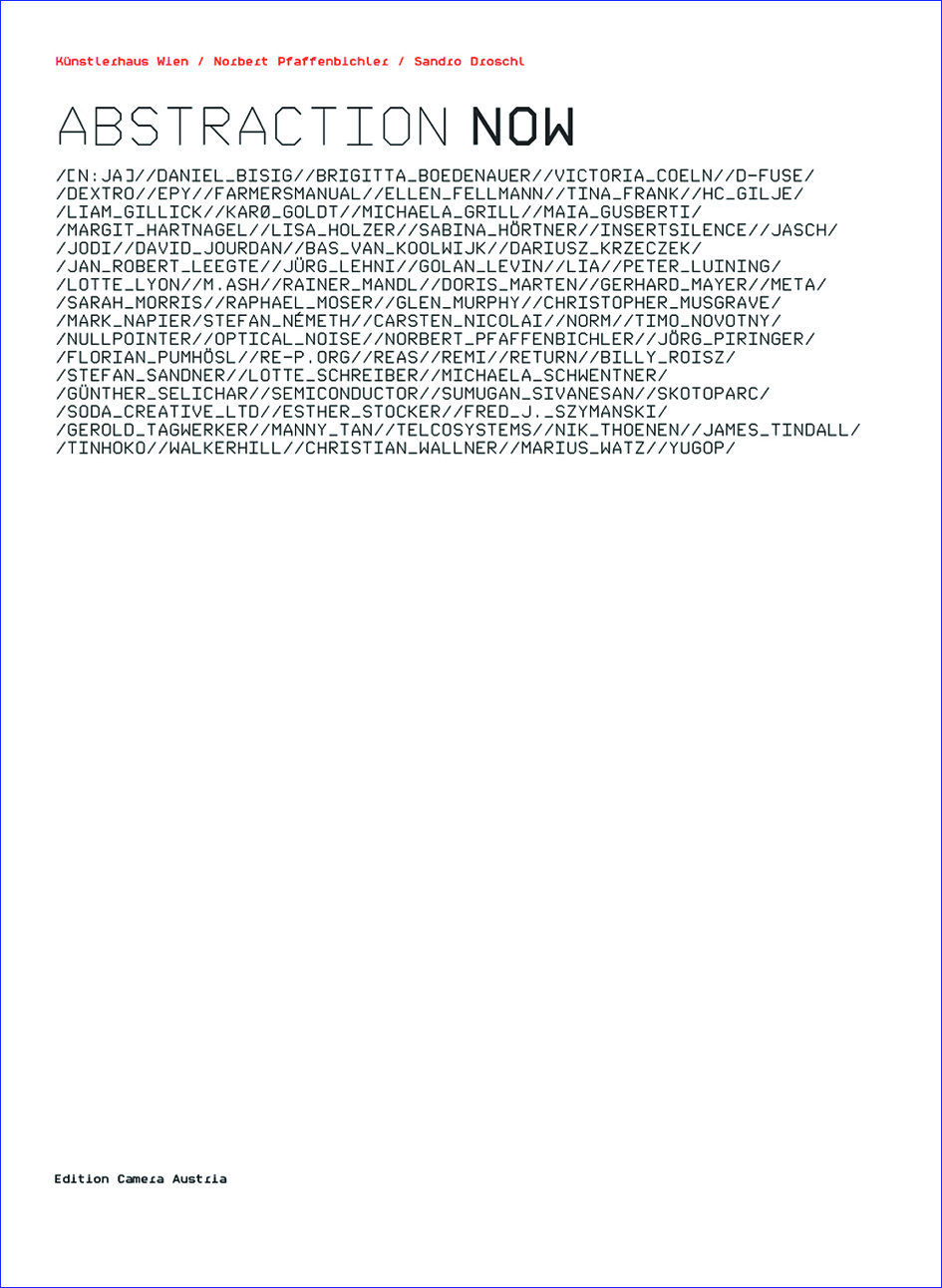 The project ABSTRACTION NOW presented novel methods and tendencies of non-representative, current art, particularly focused on audio-visual media and interdisciplinary aspects. Classical artistic genres such as painting and sculpture were confronted with modern digital forms of expression in an interdisciplinary manner. In this context, the in art theory highly over-strained concept of Abstraction functioned as common denominator with respect to content, and it referred to so far hardly considered conceptual interrelations between individual disciplines. The exhibition was accompanied and extended by a historical film program en titled MATHS IN MOTION, organized by sixpackfilm.

The exhibition as well as the publication indicate how artistic strategies of image-making have changed and expanded with the help of the new media, which specific logic is inherent to them and what consequence is applied to put them into action. Of special interest was the process-related aspect within abstract creation. A further focus is put on the comparison of Austrian and international artists; foremost a younger generation was presented.

Alltogether 85 works of 74 artists were exhibited. In the Künsterhaus-Kino 27 actual, non-figurative video works were presented. In a specially for the show adapted Medialounge, 25 computer-based works on CD-Rom and DVD as well as selected internet projects were featured. On the ground floor of the Künstlerhaus, 33 contemporary works such as painting, sculpture, photography, graphics as well as video-and computer installations were displayed.

For the present publication, authors from different faculties were invited to discuss the topic in the light of different perspectives: Norbert Pfaffenbichler ’s contribution introduces to the subject and describes some strategies of contemporary art regarding the phenomenon of abstraction. With reference to Fredric Jameson’s notion of “cognitive mapping”, co-curator Sandro Droschl comments on the exhibition’s display. The media theorist Marc Ries, among other things, relates to Clement Greenberg and centers the incident of conversion in his considerations. The art historian Marie Röbl, correlates the tradition of modernity with current tendencies, whereas she refutes simplistic continuity thesis.Lev Manovich confronts the,in its tendency reductionist gestus of modernist abstraction with an actual “representation of complexity”. Miguel Carvalhais brings up the question of the specifications of online art. Christian Höller deals with the history of the experimental film and video in the context of pop culture.