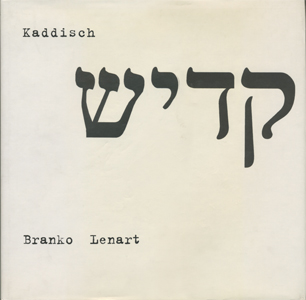 Branko Lenart’s photographs are pictures of light. Taken at the Hebrew Cemetery of Graz, they remind us of the dead in artistic abstraction. The stones convey the message of the dead. With the stones we preserve their memory. All may find their personal way to reach them.

The Kaddisch prayer is a refrain from the daily service which bears no direct relationship to death and mourning. Originally an Aramic prose poem in which the name of God was invoked in prayer for the coming of the kingdom of God, it eventually came to represent the voice of Job who calls out to God from the depths of his misfortune: “Even when he beats me, I shall put my trust in him”.

Branko Lenart’s twenty-three Necrograms are Kaddisch prayers for the spiritual salvation of the dead, regardless of where their bodies are buried. To the best of our knowledge, Jews of Graz were murdered at the same number of concentration camps by the Nazis.

Kaddisch: 23 x Chai (lives = 18) = Kaddisch (= 414). Every Hebrew letter also has a numerical value, whereby words and other combinations of letters may be added together. Branko Lenart has discovered that when the number 23 is multiplied by the numerical value for “Chai”, the Hebrew word for “live” (or “he lives”), which is 18, the result is 414, which is the numerical value for the word “Kaddisch”. Whether or not this is a mere concidence, the numerological system of the cabala allows everyone to derive their own results.