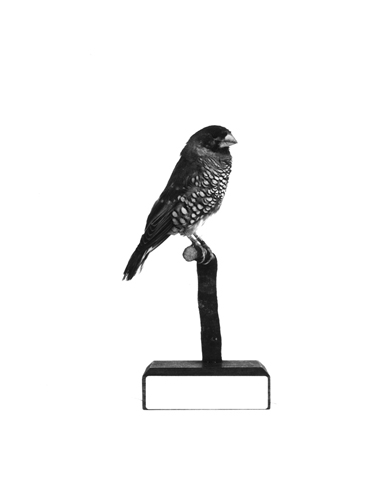 The photographic oeuvre of Tatiana Lecomte surely counts among the most unconventional and challenging of a young generation of Austrian artists. In early 2011 Camera Austria already presented the artist’s work in a solo exhibition and published her first comprehensive artist’s book in the process. Lecomte primarily draws on found images or existing reproductions, which she in turn re-photographs, enlarges using analogue techniques, subtly manipulates, photographs yet again, and continues to develop by hand. At times this results in a cycle of reproductions, with the interventions sometimes barely perceptible and other times absolutely discernible.

The current edition published by Camera Austria is comprised of five hand-made prints of stuffed birds, whereby the name of each bird is associated with the colour dominating its respective feathering. The photographs, however, are reproduced in black and white, which dowses the rich colouring of the plumage. What is more, the German designations for the birds have been removed and only the Latin names are mentioned in the captions.

At least two aspects central to photography are analytically revised here and thus called into question: for one, the adequate rendering and comparability of aspects of reality (colour), and also, perhaps less obviously, the classification of this reality through the act of photographic representation. By never failing to divest and deprive the photographic image of something, Tatiana Lecomte invariably touches on a “place” within the pictures that they do not entirely fill or fulfil. Something is missing—and is not “something” always missing in photography?