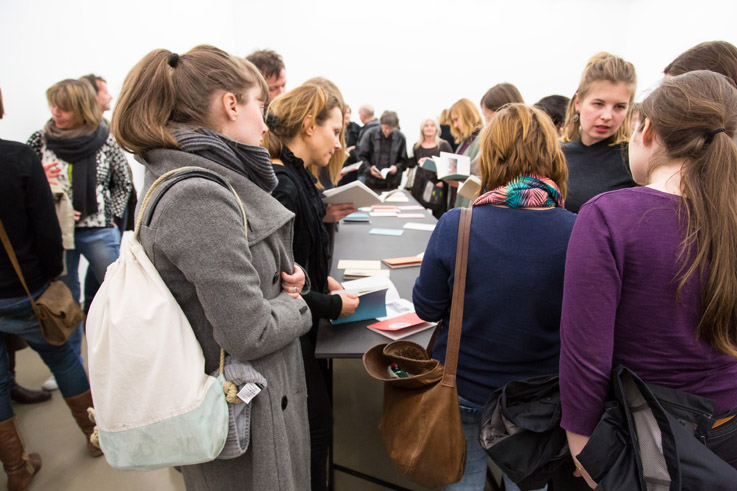 A crow, mistletoe in wintery trees, an abandoned petrol station, ACAB, “Magreth’s Café”, the café “Bombon”, the café/lounge/dance bar “Monte Cito”, graffiti with the trickled words “Liebe! Liebe!” (Love! Love!), industrial buildings, a riverbank, an SK Sturm scarf on the rear shelf of a blue Peugeot 106 XR, torn posters, streets and sidewalks and pathways interspersed throughout, playgrounds, barrier tape, balconies, violet, with artificial sunflowers, shadows on sidewalks, meadows, gates, backyards, “Tyre Fitting on Saturdays!”, the “Aquarium”, and everything begins with the view of a family from behind, walking down the middle of a side street—going where?
Triester. 12 books with photographs of the eponymous settlement in the Graz district of Gries by Martin Behr and Martin Osterider have been published since 2013, and others are in planning. The concept of a sustained, open-ended documentation, which elude any claim to authenticity and avoids any interpretation, a thread of meaning in images that counter their summarization. Triester thus poses the question as to which images can perhaps not exist, and what then happens in the interstitial realms of the images, outside of the images, and from one image to another one. Are not images called for that do not take themselves so seriously? Is there not already too much of the special, too much reality, or what considers itself to be such? Are not images necessary which, instead of not trying to convince us of something or not trying to capture reality, actually aim to open up this reality for us, to make it accessible, images which allow us to conjecture new possible meanings for this reality?

Parallel to a billboard offered to us by the Ankünder company, the presentation will take place at Camera Austria, including the newly published volume number 12 from the Triester series and a poster available at the presentation.