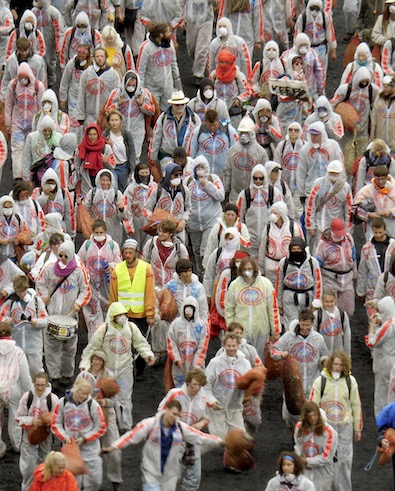 In April Oliver Ressler started working on a PEEK project he initiated, “Barricading the Ice Sheets,” which is set to last three years. “Barricading the Ice Sheets” is a research endeavor by this artist and filmmaker featuring the international activities of the climate movement with a focus on the role played by artists and cultural workers in this context.
Over the course of three years, a selection of the movement’s important mobilizations, demonstrations, gatherings, and work meetings, together with the related images, are recorded, documented, and categorized. Activists are brought together in unexpected constellations and given the opportunity to speak from platforms that would otherwise have been unavailable, which are then documented.

Camera Austria is a research partner on this project. In collaboration with the artist, we will organize a conference, publish a book, and realize an exhibition project during the period from February 2020 to Spring 2022.

Artists’ engagement in social movements is not an uncommon phenomenon. However, this engagement has never been the subject of research that manifests within the form of the exhibition itself. This new research endeavor aims to contribute to an understanding of the shifting roles among artists and activists and to acknowledge the positive contributions made by artists to social movements.

In this kick-off event, two of Oliver Ressler’s films will be shown. They deal with an economy based on fossil fuels and the related protests, resistance, and social conflicts.

Oliver Ressler, Leave It in the Ground
2013, 18’.
In recent years, countless extreme weather events have clearly indicated that climate change is not only a future phenomenon but is already taking place. Despite clear warnings, the ruling powers do not have a political agenda with a serious strategy to reduce the use of fossil fuels, the main cause of global warming. A fossil-fuel fundamentalism seems to dominate throughout the globe.
With the idyllic landscapes of the Lofoten archipelago as its background, “Leave It in the Ground” describes the climate crisis not as a technical and scientific issue, but as a political problem. The film discusses how ecological and humanitarian disasters caused by global warming might topple old orders and open up possibilities that could lead to long-term social and political transformations, both positive and negative.

The story of this ongoing film project may turn out to be a story of the beginning of the climate revolution, the moment when popular resistance began to reconfigure the world. The project follows the climate movement in its struggles to dismantle an economic system heavily dependent on fossil fuels. It records key events for the movement, bringing together many situations, contexts, voices, and experiences.
The film highlights a civil disobedience action in the port of Amsterdam in June 2017. The blockade of Europe’s second-largest coal port draws a red line against this important fossil-capitalist infrastructure facility. The largest single source of the coal shipments is Colombia, where coal is extracted under ecologically and socially devastating conditions.