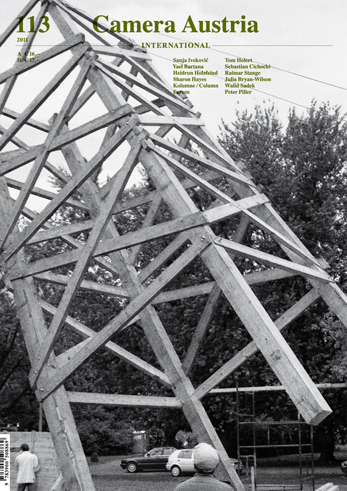 In an interview for Camera Austria International No. 107 (2009), Artur Żmijewski was asked about the discourse contexts in which he locates himself as producer of his radical documentary photographic and filmic images. He responded with a counter-question: “Which discourse should control my activity? Which one should criticise it?” Evident in this is an insistence on autonomy in the field of contemporary art, where the boundaries appear to be fixed, but are indeed newly negotiated again and again to the same extent by the actors moving in this field. What is programmatic about the work on our magazine and exhibition projects is not only newly probing the modes of using photography, but also newly sounding out our actions and our being-with-images again and again with critical reflection on our practices, and tying this into issues pointing beyond the field of art.
The current question of “community” is therefore the focal point not only of our exhibition programme in 2011, but is also reflected in the magazine. In two projects, “Communitas: The Unrepresentable Community” and “Communitas: Among Others”, we trace the growing social division of societies, the dominance of identitarian and exclusionary discourses. Many attempts to found presumably stable, manageable, community-like formations can be observed, which define themselves primarily by commonalities, but which in this way produce exposed “others”, who endanger and threaten these formations in their identity. Counter to these proposals of inclusion and exclusion, we want to make a thinking about being-common productive, which specifically does not insist on identity, which does not constantly produce fears of the “others”, a thinking that ultimately describes being-together as neither being-inside nor being-outside, but rather as being-side-by-side.