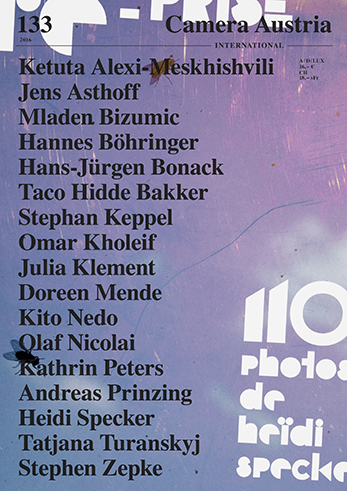 The idea behind the issue at hand deals, both loosely and inevitably, with two contrary moments in contemporary photography. On the one hand, questions are currently revolving around what photography even still is, how we can glean an image from vision, how we can “act upon” this image, and how it must be almost violently wrested from the medium. On the other hand, related questions overlap, exploring what could happen to these images—which regimes they will be subjected to and how they could be newly structured, as well as what consequences this might have for the dramaturgies of their meanings or, at least, the narratives. Ultimately, these regimes and consequences—like many of the initially contradictory demands placed on photography—lead back to a conflictual state that we have explored repeatedly in recent years: What is the photographic image able to achieve? What is expected of it? Doesn’t this fundamental ambivalence seem strangely anachronistic at a time that speaks of the post-documentary and tries to understand the image as emerging after representation? What does this really mean for the photographically rendered, when it is no longer conceived as a specific form of representation? In any case, this assumption implies an eminent fragility of photographic images, which navigate along an increasingly diffuse border between clarity, immediacy, designation and vagueness, openness, abstraction.

Monuments Should Not Be Trusted
Nottingham Contemporary
NIKI RUSSELL

Copyright © 2016
No parts of this magazine may be reproduced without publisher’s permission.
Camera Austria International does not assume any responsibility for submitted texts and original materials.