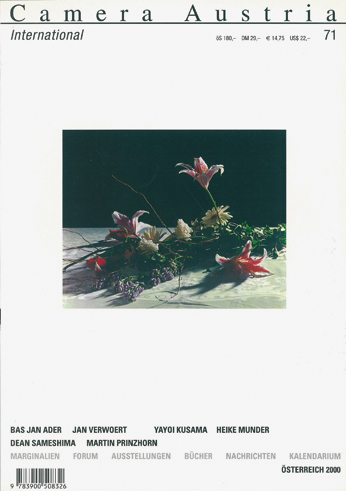 EXTRA-TERRITORIA / GRAZ 2000 is the title of a joint project by Seiichi Furuya, Róza El-Hassan and Milica Tomic, initiated in connection with the video installation “I am Milica Tomic” in CAMERA AUSTRIA’s exhibition space. The intention behind this project is to carry the political dimension of artistic concerns from within the art world – which is often disassociated from political affairs or neutralised in the white cube – into the public sphere. Networks that become apparent in the temporary co-operation with other artists and theorists are of primary concern for Milica Tomic and Róza El-Hassan.
As a magazine, CAMERA AUSTRIA maps out such networks by establishing temporary communities and cooperations. As an “extra-territorial” space, so to speak, our magazine creates a public sphere for artistic positions and, by means of the discussion platform ÖSTERREICH 2000, continues to provide space for political positionings. As a an exhibition venue as well, we intend to adopt the role of a co-producer, for which the project EXTRA-TERRITORIA is just one example. In the near future – and at the latest at the opening of the Kunsthaus Graz in 2003 – we will be able to intensify our exhibition activities and to provide access to our specialist library for theoretical and historical work.
With her sculptural works and films, Japanese artist Yayoi Kusama, who is presented in this issue of CAMERA AUSTRIA in the context of conceptual positions of the seventies (Bas Jan Ader) and nineties (Dean Sameshima), also operates in an extra-territorial space. Not only by initiating politically motivated happenings in the streets of New York City as early as the beginning of the 1960s, but also by refusing the mode of reception common at that time. It is only from a contemporary point of view that the political dimensions, and those aspects of her work that are of relevance within the context of feminist discourse, are getting increasing recognition.
What we found interesting about Dutch artist Bas Jan Ader was not so much the mythologizing of his biography – for us his importance is rather in the way he undercuts basic principles of conceptual artistic procedures. Beyond the approach of conceptual art, his works suggest a romantic notion of the subject of the artist. Introducing Bas Jan Ader here was of particular concern to us with regard to those current artistic positions that take recourse to the methodical repertory of conceptual art while simultaneously operating with a deliberately subjectivist approach. In this way, as Martin Prinzhorn demonstrates in his essay, Californian artist Dean Sameshima is able to link his acute awareness of the aesthetics of advertising photography with his relationship to persons from his private environment in what might be termed “conceptual emotion”.
Finally, it was Christopher Williams who spoke about Bas Jan Ader in his presentation at the 1995 Symposium on Photography. For this reason, we asked his permission to use his work “Bouquet, for Bas Jan Ader and Christopher D’Arcangelo” for the cover of this issue. This is another way in which networks, relationships and longstanding mutual interest become manifest. And for us, this is exactly what constitutes the background of artistic production and the work of mediation and publication.