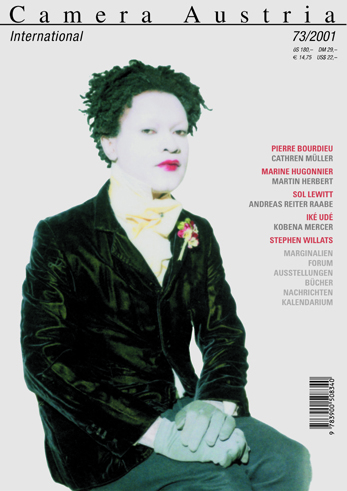 The concept of every issue of CAMERA AUSTRIA is accompanied by the wish to offer the featured artists a maximum of space to present their ideas and to offer their works and concepts a theoretical, philosophical or literary accompaniment in the form of articles written at the invitation of the magazine or the artists. The concept of every issue, however, always involves critical self-reflection: what are the motives that accompany us in our work, and how do they differ, for example, from other media equally devoted to observing contemporary art? In the twenty years since the first issue of CAMERA AUSTRIA appeared in spring 1980, one of our main concerns certainly has not changed: the idea of direct exchange with the artists, temporarily getting involved in the process of magazine-making with their own ideas.
This continuity can not only be seen in the 72 issues that have been published so far, it has been safeguarded to date particularly by the interest of the artist Manfred Willmann, CAMERA AUSTRIA publisher, in the form of constant correction, closely observing our “interactive” work process. This continuity also becomes clear against the background that many of the co-operations were the result of exhibition projects or symposiums initiated by us: a form of deeper exploration of specific issues in art beyond the concrete exhibition context, which is, however, not unlike curating exhibitions in that the artists are equally offered a place to present their own work.
In this issue we have invited, among others, a number of artists and theorists who are themselves “publishers” or who occupy themselves with problems of editing books in the field of artistic production: In an interview conducted by the sociologist Cathren Müller with Pierre Bourdieu – following on from Bourdieu’s article in the last issue of CAMERA AUSTRIA – Bourdieu not only highlights the way he sees himself as a sociologist with political intentions beyond the realm of academic self-admiration, but rather, among other things, argues against relinquishing public support for advanced art and against abolishing fixed book prices: only in this way can we safeguard the autonomy of the field of art – an autonomy gravely challenged by neoliberalism. This discussion will need to be held in future, particularly if the substitution of public subsidies with private sector funds (from UNICEF to art sponsoring) threatens to curtail freedom of expression, as Bourdieu observes in his analysis.