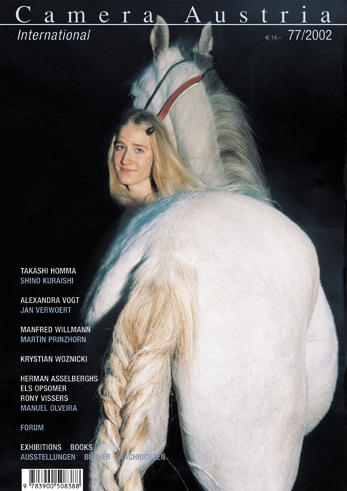 In his essay on the works of Manfred Willmann, Martin Prinzhorn begins by spotlighting the difficult relation between the town and the country in contemporary art production: the country is usually either incapable of dialogue with the remaining, urban part of culture or serves merely as a projection surface for quite different yearnings and fears of mainstream culture. Nevertheless, we have invited artists to contribute to this issue who, among other things, deal with this very relation in their work. In this context, Willmann’s work is an example of the unmasking of the, as Prinzhorn says, fantastic nature of constructed contrasts between “town” and “country”: just as it seems impossible today to represent a construction of the “town” by an accumulation of stereotypes (of which “modern art” is doubtless one), the construction of the “country” does not act as a counterweight. In his pictures vom Land, of the country – photographs taken over a period of ten years –Willmann pursues a strategy allowing him to circumvent the many snares inherent in the subject by focusing on details. This approach makes it difficult for the viewer to reconstruct the harmonious whole that makes up the country construct.