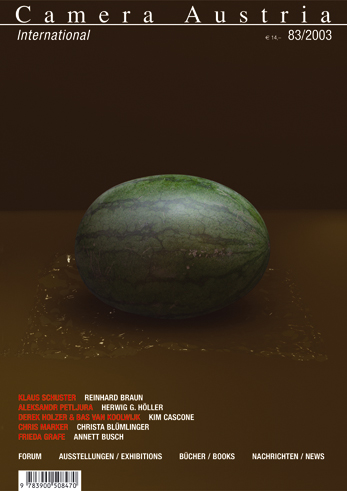 In the form of monographic contributions, Camera Austria No. 83 focuses on a series of very individual positions which, as so often, transcend the notion of photography in the narrower sense, extending the concept of the image to encompass media, film and performance: The Austrian artist Klaus Schuster has been specifically exploring the artificiality of images since the mid-nineties. His digitally constructed photographs and video works appear to be “ambiguous images” between hypothesis and reality. In his contribution, Reinhard Braun presents Schuster’s current series entitled “Selbstorganisation” (Self-organisation) which, like his previous works, deal in depth with “the constantly changing association between the object portrayed, the technique and contextual knowledge”, reflecting above all on the process of image creation itself.

In the form of monographic contributions, Camera Austria No. 83 focuses on a series of very individual positions which, as so often, transcend the notion of photography in the narrower sense, extending the concept of the image to encompass media, film and performance: The Austrian artist Klaus Schuster has been specifically exploring the artificiality of images since the mid-nineties. His digitally constructed photographs and video works appear to be “ambiguous images” between hypothesis and reality. In his contribution, Reinhard Braun presents Schuster’s current series entitled “Selbstorganisation” (Self-organisation) which, like his previous works, deal in depth with “the constantly changing association between the object portrayed, the technique and contextual knowledge”, reflecting above all on the process of image creation itself.

Herwig G. Höller has visited Aleksandr Petlyura; the Moscowbased artist has been regarded as a key figure of a Russian independent art since the beginning of the nineties. For more than twenty-five years he has been painstakingly collecting pieces of clothing and flea market objects. The artist ironically presents this form of research into cultural history – that allows us to trace back the intellectual history of Russia from the turn of the century, through the era of the USSR, to the present day – in concepts operating outside the realm of mainstream, concepts that equally involve performances, theatre appearances in the fashion context, installations and photographs.

“Ozone” is the title of the space-filling electromagnetic environment presented by Derek Holzer (USA) and Bas van Koolwijk (NL) at the Medienturm Graz this autumn. The contribution by the American musician and media theorist Kim Cascone illustrates the background of this system-based form of art.

The work of the French director Chris Marker centres around an interest in film as a medium of memory and recollection. Christa Blümlinger reflects on Marker’s approach in her theoretical, critical contribution. This piece was prompted by the legendary films “Sans Soleil” and “La Jetée” recently published on DVD, but above all by Marker’s interactive installation “Immemory”, the CD-ROM version of which (the classic medium for a memory archive) offers access to and links up many different stored memories.

Frieda Grafe, who sadly passed away last year, counts among the most important film critics of our time. This issue features an hommage dedicated to her. A twelve-volume edition of her unpublished works is currently in preparation by Brinkmann & Bose, two volumes have already been published, a third will follow in October. Focusing on her style of writing, Annett Busch delves into Frieda Grafe’s extensive work, thus also forging a link to thoughts already presented by Grafe at a symposium on the subject of “Image: Text” in Camera Austria 24/1987.

Camera Austria will move into its new exhibition venue in the Kunsthaus Graz in October 2003. From the end of 2003 onwards, the editorial staff of Camera Austria magazine too will work out of the Kunsthaus. With the new exhibition venue and the study library in the Kunsthaus Graz, the Camera Austria project now has the opportunity to continue developing these ideas on presenting and transmitting photography in a way that is ideally suited to museums of contemporary art and to cooperate with universities to reach a wider audience. The Camera Austria programme in the Kunsthaus Graz will focus on themes which go beyond media-specific issues. Our close cooperation with artists constantly challenges us to think about our own work and to view the medium of photography not only as an aesthetic “product”, but also as a specific form in which questions about society and culture can be formulated and discussed. The task which confronts us in a new guise through the opening of our rooms in the Kunsthaus Graz therefore consists of finding relevant questions which transcend the borders of art, of critically observing cultural developments, and of maintaining a constant dialogue, appropriate to our times, with creators of art.

The opening of CAMERA AUSTRIA – KUNSTHAUS GRAZ will be marked by two projects which were conceived as contributions by Camera Austria to the programme of Graz 2003 – Cultural Capital of Europe. Titled Keep in Touch, these projects focus on questions about the social use of images and which thus define the scope of Camera Austria’s work.

“Positions in Japanese Photography”: An exhibition of current photography with contributions by Mao Ishikawa, Tomoko Sawada, Masafumi Sanai, Risaku Suzuki, Kyoichi Tsuzuki, and others will open on October 3, 2003. A two-day symposium will take place on October 31 and November 1, 2003 to discuss these positions with Japanese theorists, curators and artists.

“Pierre Bourdieu: In Algeria. Testimonies of Uprooting”: This exhibition begins on November 14, 2003 and constitutes the firstever showing of the photographs which Bourdieu made in Algeria between 1958 and 1961 as part of his ethnographic and sociological fieldwork. According to Bourdieu, these photographs constitute his “earliest and at the same time most topical” work.
We would also like to draw your attention to our most recent publication: Allan Sekula: TITANIC’s wake, which places Sekula’s works, “Dear Bill Gates” (1999), “TITANIC’s wake” (1998 – 2000), and “Waiting for Tear Gas” (1999/2000), into the context of this “critical documentarism”, based on a background consisting of a characteristic combination of photography and essays, concept art and critical journalism. The essays selected for this book are published in German here for the first time. In these essays, Allan Sekula refers to some of his own writings such as “The Traffic in Photographs”, published in 1984. There he asked what role the myth of photography as a “universal language” plays (“Between the Net and the Deep Blue Sea”). The essay “TITANIC’s wake” illustrates the 23-part photo series of the same name and places topics such as exploitation and economic supremacy into the context of larger socio-political problems. “Waiting for Tear Gas” comments on the slide series of the same name, which, created in Seattle in 1999, documents the formation of the anti-globalisation protest movement. Thus “TITANIC’s wake” constitutes yet another significant contribution both to contemporary art and to our understanding of the pressing problems of contemporary society.

We are looking forward to you visiting us at our new base CAMERA AUSTRIA – KUNSTHAUS GRAZ. We will also be featuring at a number of art shows this autumn: Artforum Berlin, Kunst Wien and Art Cologne – please take this opportunity too to inform yourself about our extensive programme.

To round off, another piece of particularly good news: Reinhard Braun, who has been collaborating with our magazine for several years as an author and editor, will be joining our team as a curator and editor this autumn.