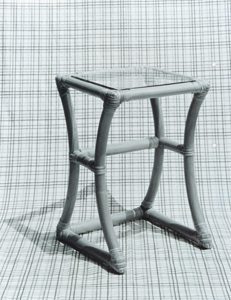 Annette Kelm (born 1975) occupies with her works a consequential position in the contemporary debate on advanced conceptual strategies in photography. Drawing, for one, on the pictorial conventions of studio photography, she moreover abstains from a purely objectifying representation by interjecting disconcerting props that purposefully keep the depicted motifs and their meaning in suspense. Her photographs, seemingly objective at first glance, oscillate between precision and ambiguity. On the heels of solo exhibitions at Witte de With, in the Kunsthalle Zurich, and in the KW Institute for Contemporary Art in Berlin, Annette Kelm is exhibiting her photographs for the first time in Austria.

On the heels of initial institutional solo exhibitions held at Witte de With in Rotterdam, in the Kunsthalle Zurich, as well as currently at the KW Institute for Contemporary Art Berlin, we are presenting the works of Berlin-based artist Annette Kelm (born 1975) for the first time in Austria. Since the wide reception of her work, created in an extended artistic context, has for the most part lacked concentration on medium usage, the exhibition in Graz likewise sets out to draw the work into a photography-specific debate and to explore Kelm’s exceptional employment of her medium.

With poignant precision the artist tackles pictorial conventions using photographic means. She invokes the genre of the still life along with that of object and studio photography, with architectural and landscape images rounding out her comprehensive oeuvre. With a methodically stringent, formalised approach, high image definition, neutral lighting, and an “objective” camera angle, Annette Kelm leverages the subjects and objects of her photographs to a kind of a hyperpresence of the real, to a presence of the factual. Yet through subtle placement the subjects also appear ambivalent due to the manner in which they are combined: for the artist, possessing an acutely refined sense for formal congruities, positions very different objects together, or smuggles “alien” details into seemingly perspicuous motifs. The photographs, which appear temperate and elegant, thus acquire a measure of eccentricity and elude immediate interpretation – on the contrary, the motifs seem obscure. For instance, Annette Kelm places the first e-guitar, a 1934 Rickenbacker model “Frying Pan” (2007), in front of African wax batik fabric with an M.C. Escher-like staircase motif; in the series “Stars Look Back” (2006) she photographs a cubical bamboo table, each time slightly shifted, with shadowings in various directions, in front of graphically patterned cloth. The respectively different lighting of the motif along with the colourfully divergent composition seem to indicate a flawed photographic process that Kelm in this series doesn’t actually correct after the fact but instead openly exhibits, considering her own perfectionism, as effects of the analogue technique. Typical for her work are constructions of pictorial space that are easy to grasp visually but culminate aesthetically in a hybrid manner, a subtly directed objectual presence inherent therein, as well as the making-visible of the photographic process. Evident here is Kelm’s scrutinising and comparative reassessment of the promise of photography as a purportedly objectifying method of representation. Equally apparent, however, is her intention of qualifying photography as a proverbially imaging medium with its own logic. Thus Kelm’s images well-nigh defy, contrary to the initial impression, the classifications of photography and of its traditional scope of use as a documenting, staging, and analysing method of recording. On the contrary: it is a strict working with the image that is not possible without critically questioning conventional access to the medium and undermining the related ascription models.

Kelm’s penchant for the ornamental or the artistry of an object, sometimes even decor, is in some ways inconsistent with the reduced severity of the photographic technique, and yet is still calculated. For precisely this strict orientation toward formal criteria – such as, for instance, abstaining from having details in the surroundings take on a narrative function – and the selection of a purely object-related representational form serve to charge the motif with an almost affected presence. This strategy underlines the hybrid character of her pictures, which transcend purely factual perception and comprehension and oscillate at the margin of perception and knowledge. Kelm is hence at the same time criticising the classical attributions of photography as a technique of exposing and perceiving.

The exhibition in Graz is showing photographs and series from the past ten years. As such, it provides an overview of the wide range of Kelm’s works. Photographs from the artistic beginnings are presented alongside more recent productions. The exhibit selection in this show is thematically associated through a concentration on Kelm’s treatment of pictorial space. For not only is enigmatic motif selection characteristic for her photography – of central importance for her work is likewise the divesting of the pictorial space of its concept and context. In one of her earliest works, “Untitled (ref: leaf)” from the year 1998, she works with the imaging technique commonly used in advertising called the “pack shot” where objects and subjects are depicted without shadow in front of a neutral background. Already apparent here is the formalised austerity with which Annette Kelm would be repeatedly working in order to direct her subjects into a visual structure of isolation. In “Untitled (ref: chimney)” from the year 2001, in turn, she organises – through the photographic technique (flash) and through a mostly uniform colour scheme – the relationship between foreground and background vis-à-vis conventional hierarchies: the objectual presence virtually dissolves here so that the view completely obscures. Nothing else can be signified here and associated with its usual perceptual function; instead, a strongly suggestive effect develops. With this and with subsequently created, comparable works a visual strategy becomes evident that Kelm brings to a climax in her more recent works, such as in the “Big Prints”, which are photographs of generously patterned, opulent furnishing fabrics by the influential American interior designer Dorothy Draper. The pictorial space is reinterpreted as extreme planarity, and Kelm aligns it with the object of representation in one-to-one reproductions: the pictorial space therefore dissipates at the surface while it is, at the same time, just soberly portraying the object after all. Apparent here is Kelm’s systematic, almost radicalised objectivity with which she succeeds, in a totally new way, in circumventing the conventional logics of representation governing the photographic. In the process, photographs of powerful intensity emerge, burgeoning with almost psychedelic impact.