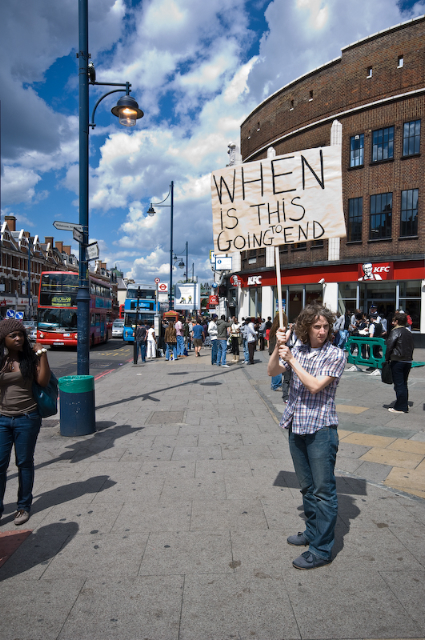 Sharon Hayes, When Is This Going to End. Aus der Serie / From the series: In the Near Future, 2009.

The (political) question of “community” is the focal point for our exhibition activities in 2011. Two projects examine a number of societal phenomena and their critical representation: the proliferation of communities, the formation of groups, that implies an increasing social divide, new discourses on identity, “leading cultures”, etc. as a reaction to a – subjectively perceived – loss of societal values and societal cohesion. As a consequence of this, we are, however, equally witnessing an increase in exclusion, deportation, expulsion, punishment and ethnic cleansing – in order to ensure an environment that is not defined by equality, but rather by sameness. In opposition to these drafts of inclusion and exclusion, the two exhibitions encourage a reflection on community that does not insist on common identity, describing coexistence neither as being inside nor outside, but rather as being side-by-side and being near. The first exhibition – The Unrepresentable Community – revolves around questions of criticising representations used to create common identities. The works on show allow us to view community beyond ascribable identities, spaces, specific fields of society or images: as an opportunity, as a utopia, as an unredeemable project that does, however, prevent the closure of society and the essentialisation of communities.

“Nothing seems more appropriate today than thinking community; nothing more necessary, demanded and heralded by a situation
that joins in a unique epochal knot the failure of all communisms with the misery of new individualisms. Nevertheless, nothing is further from view; nothing so remote, repressed, and put off until later, to a distant and indecipherable horizon.”
Roberto Esposito

The (political) question of “community” is the focal point of exhibition work in 2011. Two projects will follow a series of social phenomena and their critical representation: the proliferation of communities causing increasing social divisions and anticipating new identitary discourses. The insistence on deportations, tightening immigration laws and border controls, the political declaration of the failure of multicultural society conceptions indicate an “ideological image of a desirable and costly admission to an inside and the counter-image of an unsettling, dangerous outside, burdened with fantasies of strangeness, poverty and criminality” (Tom Holert). What emerges “around the threat and defense at the border is an imaginary space of the ‘integrated’ national community, which is actually being permanently undermined by globalisation” (ibid.).

Increasing recourse to the community concept (in debates about integration, migration and cultural difference) appears to be a consequence of the—at least subjectively perceived—loss of binding cultural values and social cohesion. “The misery and the suffering of our times are fragmented, scattered and dispersed, and the same is true for the dissent arising from them.” (Zygmunt Bauman) More and more communities are proliferating, which claim to work against this fragmentation, to have something to offer that joins “us”: strategically (an interest, a goal, a minoritarian existence) or as a common cultural space, something that we share, that we belong to or that belongs to all of us equally. Within a “normative ambiguity” (Zygmunt Bauman), community has become ‘a dimension of collective being instead of collective agency—except in one respect. The only actions that a group comes together for are those of cleansing, of the exclusion and punishment of those who are ‘different’ from the others” (Richard Sennett). Consequently we are experiencing an increase of exclusion, expulsion, banishment, punishment, ethnic cleansing, neo-mythical glorification of the national, and constantly new inventions of images of the enemy—to secure the imaginary space of shared values, shared identity. Yet this imaginary space is characterised less by equality, but rather by a stronger and stronger compulsion to sameness. Counter to this proposal of inclusionary and exclusionary communities, however, a kind of thinking has grown stronger that does not seek to discover a special kind of being in being-community, “no substance, no common subject” (Jean-Luc Nancy), no common origin; a thinking that does not consider community as the salvation of identity, but rather as co-existence beyond the realm of models of the own, the intrinsic, and which thus grants the question of the Other, of being other, a new space in the here and now of the community. The exhibition project thus revolves around utopias of a being-communal beyond “the figure of individuality that has become meaningless” (Giorgio Agamben) and presents artistic positions that locate this notion of being communal beyond identity politics in historical societal formations, derive it from urban and/ or representation-political analyses, or newly draft it as a counter- proposal to current political ideologies. With the works shown, the exhibition posits an idea of co-existence for debate, which is understood »at the same time as ‘being-in-between’, ‘being separated’, ‘being distinct’, ‘being among others’, and ‘partaking’. With means neither inside nor outside, but rather side by side and close by.” (Jean-Luc Nancy)

The first exhibition—“The Unrepresentable Community”—revolves around issues of the critique of representations, which are employed for establishing common identities: images are always needed to insure a being-the-same, when “visual culture is the visual construction of the social” (W.J.T. Mitchell). The overwhelming presence of certain images engenders a certain way of knowing, a kind of visual programming of political space. Which role can artistic practices with and about photography play in breaking through this programming? This is not a matter of different contents, of counter-images showing the “reality” of the “victims”, nor of documentary images that first make new zones of conflict visible to us. It is primarily a matter of showing the distribution of power, of photography as identitary discourse itself, its production of order and narrative, which is subordinated to a “coherently stable subjectivity of seeing” (Tom Holert), an order that attributes and distributes visibility, roles and knowledge, which still determines what can be seen and what is even visible at all. The works shown in the exhibition open up possibilities of finding out what is communal specifically beyond attributable identities, spaces, specific social fields, images and visibilities, in terms of both their authorship and their praxis of subjectification: as a possibility, as an utopia, as an irredeemable project, possibly as permanent failure, yet which prevents the closure of society, the essentialising of communities. In this way, the aspiration is formulated of making “new agreements about the connection between things, words and images” (Tom Holert), changing the frameworks, in which images have always appeared to confirm a certain knowledge of the own, the own identity and the own culture.

The second focal point of the exhibition project—“Among Others”—revolves around issues of exclusion, following from a critique of representation. Exclusion can mean “differentiation or exile, banishment, victim, contempt, marginalisation, identification, normalisation, selection, choice, origins, etc.” (Jean-Luc Nancy). The degree of exclusion also regulates access to cultural, economic and ecological resources—exclusion permanently produces images of the others, the excluded, in order to legitimise itself as the own, the same, as identitary community. The mechanisms of exclusion are not manifested primarily in the phenomena of various demarcations, but rather start from the inside of postulated communities. Languages, images, access possibilities arise, which split and subdivide society into a multitude of parallel worlds, which increasingly regulate cultural and economic possibilities for agency and define their scope. Which figures of cultural representation are presently involved in the production and reproduction of exclusions? This exhibition therefore focuses on the question of how representation and the (political, social) mechanisms of exclusion are connected. “How to exclude without forming figures? And how to form figures without excluding?” (Jean-Luc Nancy) The title indicates that “we” are always already among “others” and that we cannot even detach ourselves from this entanglement, because the presumed own is always already affected and permeated by the other—“because inclusion is the modality of exclusion and vice versa” (Roberto Esposito). If the communal is characterised not by what is own, proper, but rather by the improper, by the “common”, in which the other also always has a share, then do we not already long since encounter this “other” in many images (whether post-colonial, post-communist, postemancipatory, post-national)? Can traces be found in the field of artistic image politics, which mark a being-communal beyond the disastrous politics of exclusion that characterise our so-called neo-liberal era based on “spectacular insecurity and chronic instability” and an “insistence on the individual” (David Harvey)?

The title of the exhibition is based on the book of the same name by Roberto Esposito: Communitas. The Origin and Destiny of Community, Stanford University Press: Stanford 2010