A book is being prepared with Tatiana Lecomte, which presents a compilation of her most important works in recent years for the first time. 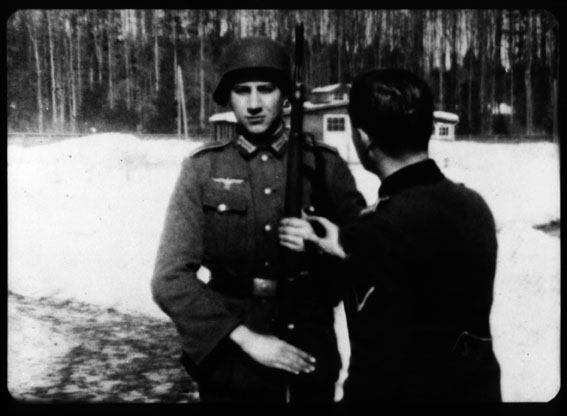 With Šejla Kamerić and Tatiana Lecomte we programmatically present the works of two artists, whose photographic projects call for an eminently political reading. At the same time, they refer to questions of representation, the role of the photographic image as part of a regime of visibility, and to the manner in which photography is implicated in the production of personal and collective history and political past and present.

Šejla Kamerić shows – for the first time in Austria – the series “Embargo till 11” (2011), which links lyrics – from Leonard Cohen, the Bangles, all the way to Santa Esmeralda – with photographs from the collecting cards of the tobacco company Austria Tabakwerke AG from the “Edition Adolf Hitler” up to the year 1942. The series thus focuses on the relationship of different collective memory spaces.

Tatiana Lecomte also shows new series, such as “Stills” (2010) and “Untitled” (2010), which are based entirely on found images and existing reproductions. In this way, she relieves photography from the obligation of revealing and does not assume the role of someone who has something to show, because what can be shown at all is questionable.

In referring to historical events, the significance of which is essentially unrepresentable and cannot be reduced to replicable elements of reality, the artists show pictures that have given their time its image. Some of them are familiar, arouse certain associations, but they are ultimately also so distorted or re-contextualised that what there is to be seen (the bodies, the gestures, the people, the crowds, the cheering, the illness) basically raises the question of what there is to see at all, what it refers to and what it speaks of. The question of what there is to see and how it is shown (how representation and what is represented come together or coincide and what ultimately results from this) itself targets the core of photographic representation: the suitability of visualisation is doubted, the fixing of meanings is undermined, but what is also brought into play is what representation, the image has possibly always hidden, but which could also open up a space for infiltrating politics and history with different images.

In the following you find more detailed information about the artists and the works in the exhibition.
A book is being prepared with Tatiana Lecomte, which presents a compilation of her most important works in recent years for the first time.
Šejla Kamerić opens her first extensive solo presentation in Germany on 28 January 2011 in the Galerie Tanja Wagner.

“Do you understand me now?” Read it your way and dare to guess. “But don’t you know that no one alive can always be an angel.” What do you see? “When things go wrong I seem to be bad.” Would you ever guess I was thinking of something else? “But I’m just a soul whose intentions are good. Oh Lord, please don’t let me be misunderstood.”

“Oh, oh baby don’t you know I’m human.” I have pieces of history I tend to loose. “Have thoughts like any other one.” But who would guess. “Sometimes I find myself long regretting. Some foolish thing, some little simple thing, I’ve done.” Do you see what I see. Or is it just me? “But I’m just a soul whose intentions are good. Oh Lord, please don’t let me be misunderstood.”

Starting from her experiences during the nearly four years of the siege of the city of Sarajevo in the early 1990s, Šejla Kamerić turns her attention again and again to general questions of war, violence, power and nationalism, but also of guilt and shame. The traces of these power formations are inscribed in memory and in memories – and thus also in the possibilities of constructing reality, of constructing the present. This means that they also influence ongoing attempts to imagine a (new?) identity that is not marked by mutual exclusion, guilt and fear. Which common spaces do we share through our common memories? To what extent do different memories cause a rupture in this common (cultural, political, historical) space? Which role do images play in these processes?

In her exhibition for Camera Austria she shows – for the first time in Austria – the series “Embargo till 11” (2011), which, leads us into this kind of shared (equally traumatic) European space of memory. In this, however, she makes use of an indirect intervention, so to speak, which takes into account the non-representability of the reality of the events. On twenty-five poster stands we see, on one page each, lines from song lyrics, into which small format black and white photographs are inscribed, so to speak. The photographs trace back to collecting cards from the tobacco company “Austria Tabakwerke AG”, which were distributed with cigarette packages. A collection album was published in 1940 with the title “How the Ostmark was Liberated – Adolf Hitler and his Path to the Greater German Reich”, into which all 314 cards could be inserted. The original back sides of the collecting cards can be seen, on the back side of the poster stands: “Picture No. 261: A Viennese house finally Jew-free raises the white flag. The collection album with detailed texts is available in every tobacco shop for Reichsmark 1,–. AUSTRIA TABAKWERKE A.G. FORMERLY ÖSTERR. TABAKREGIE”.

These collecting cards thus document the diffusion of a regime of images into the most commonplace contexts of behaviour; many of them involve pictures that were already familiar and widespread at the time (such as from military parades, staged scenes, speeches by the Führer, enthusiastic crowds), which together with images from everyday life completely occupied the terrain of the visual.

In “Embargo till 11” these images appear in song lyrics, such as from Leonard Cohen and the Bangles, are thus placed in a new context of the production of a collective remembrance, a shared memory and culture. “Lyrics refer to the image as a straightforward association game that is free from any history or memory references. In this way the work investigates the process of remembrance and assumptions.” (Kamerić)

Whereas Cohen sings sentimentally about his attempt to be free and laments how he betrayed all his friends, this story about the desire for reconciliation is in stark contrast to the cheering crowd climbing trees to catch a glimpse of the Führer, a crowd that is thus in a collective delirium and about to transgress the boundary of the humanity that Cohen sings about. Does crossing that boundary itself still have consequences for the popular culture of our time? Or when a parade of National Socialists is seen next to a line like “Just another manic Monday”, referring to the grind of working life, the fear of coming too late and losing the job, to the frustration about everyday life and its lack of perspectives – we inevitably associate this for ourselves with labour camps, with forced labour.

These images that Kamerić infiltrates into precise contexts of meaning, are they not shifters for the multitude of images that we know, that we can call up, and that have left indelible traces in our common culture? But before the back sides of the collecting cards can be seen, visitors are led past the song lyrics and pictures to open up a space for their memories, knowledge and associations. So if it is a question of what is shown, what is to be seen, then Kamerić always also shows us what we already know, but which we can only very laboriously take possession of, if at all, because “the impossible is forced to pass over into the real” (Giorgio Agamben). All that remains then is to ask which reality “Embargo till 11” “speaks of”.

We see a young soldier during drills, the hut or barrack in the background suggests military barracks or a camp as “setting”. In a series reminiscent of film stills, another man in a uniform suddenly appears following a moment of asynchronous projection, who correctively touches the young man’s hand lying on a gun. At once correction, intervention, arrangement, which relay a hierarchy, and intimate touch, the suspension of distance, ritual.

We see a hand offering a white, powdery substance to a small African boy. The segment is enlarged, we see a white woman carrying out this presentation, and another series ends with the focus on her. The woman is Leni Riefenstahl, who regularly visited the Masakin-Qisar Nuba in Sudan beginning in 1962. Here too the quasi filmic photo sequence “observes” a gesture oscillating between giving/determining and receiving/following, a gesture implying a distance that is overcome. Touch. Fixing. For a moment. Disintegration. Disappearance. What collides here, for which these photos develop a form?

In the new series created for this exhibition Tatiana Lecomte temporalises found images in a fictive, short film sequence. The photographs are thus translated back into a plot context, seeing is spatialised, and a representation from one significant image rectangle is transferred into an in-between space, into a “between”, of which Jean-Luc Nancy writes that it does not lead from one to another, but instead forms the fundamental separation that first makes an appearance possible at all. “As soon as there are two of them, there are three. (…) That is what I understand as an image, this image composed of two images” (Jean-Luc Godard) A heterogeneity of every touching of the images in the montage. Like the heterogeneity of the touches that are spread out in the images. Or the heterogeneity between (photographic) image and reality. What comes together then?

In many of her series from recent years Tatiana Lecomte questions the imperfections of the photographic, demonstrating what cannot be depicted (landscape shots from the grounds of former concentration camps, where nothing of the unimaginable can be see, how could it be otherwise?). This may be the reason for not showing or not treating any pictures in the exhibition that the artist made herself – evading the attribution of revealing, not assuming the role of the one who has something to show, because what can be shown at all is questionable.

Lecomte thus makes use solely of found images in the exhibition, such as a reproduction of historical photos of the burning Warsaw Ghetto, which she mounts from multiple enlarged prints that only convey an impression of the billowing smoke from a distance and thus an impression of the destruction and the obliteration that took place, which must now be reconstructed from the visible grains of the “original” reproduction. Something coincides in the surface of the photograph, an inscription occurs – except that the photographs that can be seen in the exhibition have encountered no reality; they show inscriptions from other photographs again. “For every image is suspended above other images, because the ground of an image is always already an image.” (Gilles Deleuze)

Another new series consists of black and white photographs photographed from a dermatology text book from the the early 1940s, where each excerpt has been standardized (Untitled, 2010). Skin marked by disease as a metaphor for the inscription of violence in countless human bodies? Due to the enlargement, the pathological structure of the skin coincides with the printing grid and granularity, in other words the materiality of the photographic surface: the skins of the reproductions coincide with the skin of the bodies. Where is the boundary of photographic representation to be drawn, where does the “between” between image and reality occur? What occurs in the photograph as intersection? Lecomte shifts this question to representation itself: nothing is to be seen as a trace of reality, but everything has to do with traces of this reality. The absence of reality and the absence towards reality, so that “thinking has its place in the visual” (Georges Didi-Huberman).