Opening
6.12.2019, 6 pm
In the frame of the ceremony
Camera Austria Award for Contemporary Photography by the City of Graz 2019 to
Lebohang Kganye

The opening is taking place in the scope of CRK+ 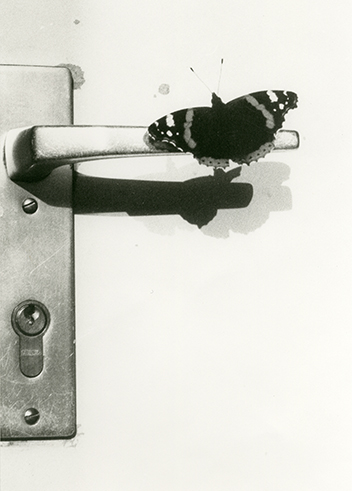 Jochen Lempert (b. 1958) has a degree in biology and has been working since the early 1990s on a project, in which the perception of flora and fauna in systems of representation within the context of scientific research encounters the individual observation of the animal and plant world within an environment designed by humans.
Through analogue black-and-white photographs, an equally fascinating and complex (and inevitably incomplete) inventory of morphological studies arises, which counters the taxonomic classification of animals and plants with very subjective documentary material. Cross-references, associations, and correspondences within the photographs grant new perspectives on our own place within these structures of order and chance characterizing the world. Here, Lempert’s work unleashes a grand visual poetry that is mirrored in a distinctive visual language, which not least lends his oeuvre a unique position within contemporary photography.

For his exhibition at Camera Austria, Jochen Lempert puts his black-and-white photographs in relation to publications from the extensive library on site. The horizontal display gives rise to a visual dialogue by different photographic carrier mediums, so that form- and content-related design patterns are apparent among the books, as well as narratives, typological features, and associative connections.

Jochen Lempert’s view of flora and fauna is characterized by the detection of the similar in the diverse, by the beauty of details, and by a fascination with mimesis and mimicry—camouflage patterns appropriated in animal prints or leaves resembling animals. Having studied biology, Lempert observes the living system of nature which lends itself to classification yet surprises us by taking new and different forms again and again. Therefore, Lempert’s working method is akin to “fieldwork” that involves observing, viewing, and collecting, with the sensory approximation of the surrounding environment meeting the tradition of the natural sciences. In analogue black-and-white photography, he contrasts the rendering of nature and animals in the representational systems of scientific research with subjective observation of the human-shaped environment and its habitats. His photographs of animal, plant, micro-organic, and human life forms unfurl a fascinating and complex inventory of morphological studies that inevitably remains incomplete. These pictures bring taxonomic cataloguing with its anthropocentric view of nature into contrast with a radical individual documentation that nonetheless reveals an intensive exploration of visual aesthetics from the natural sciences. Phenomenology and exploratory comparison likewise meet in the idea of the photographic “trace” by which photography is seen as a medium for documenting movement and change, as well as for reconstructing, developing, and demonstrating correlations.

In this photographic practice, it is rare for a focus to be placed on the individual image. Rather, Lempert arranges motifs as juxtapositions or series in which forms, details, or patterns are repeated, even when the motifs themselves strongly differ. Thus, since the early 1990s, a body of work has emerged that is shaped by the correspondence and contextualization of individual shots in larger groups. The cross-references, associations, and affinities within this grouping of individual photographs of emphasized object nature also foster new perspectives on our own place within those structures of order and chance that characterize the world. At the same time, this work unleashes an ample visual poetry, which unfolds especially through the orchestration of ever-surprising juxtapositions.

The fact that the artist has forgone any kind of framing simplifies the creation of references among the images. In his exhibitions, Lempert intuitively decides how his works will be mounted, which gives rise to a very unique rhythm through the placement of the photographs and the combination of different formats. Since 1992, and thus in fact since the beginning of his artistic activity, he has been presenting his photographic investigations of nature in a broad manner, not only in the form of prints, but also through the medium of the book. Here, he avoids bibliographic limitations like “catalogue” or “artist book” in favor of a concept of publishing activity that equates to that of exhibition-making. Moving beyond the representative documentation of artwork, his books follow a principle where the editorial selection and design of the sequence of photographs engenders new narratives across the pages. These publications do not serve to catalogize his work, but quite the contrary: they are conceived to capture the ephemeral, which as image in a book counteracts the tendency of the natural sciences toward categorization and classification. Lempert’s own visual material is repeatedly recontextualized in order to negate the expectation that book and exhibition illustrate each other or that the same or similar arrangements could repeat. In fact, each format follows its own intrinsic pictorial logic. There are photographic works, for instance, that have still today not made their way into a book, while other photographs have been only published and never exhibited.

Jochen Lempert’s exhibition at Camera Austria takes this process of constructive comparison a step further conceptually and situates the photographic print next to other forms of visual representation: reproductions in books from the extensive library on site meet with a selection of small working prints, thus fostering an open system of dialogues, references, and analogies. Open pages of artist books and exhibition catalogues underscore the importance of the book page as a photographic carrier medium. Here, the reproduction and the original print are each presented in their own quality, rather than being played off against each other. Camera Austria’s publicly accessible library—with its nearly 10,000 monographs, exhibition catalogues, reference works, and magazines—offers a cross-section of photography publications at the interface of media history and contemporary art since the 1970s, thus providing the ideal raw material for such an “imaginary museum” that stages works of art engaging in visual dialogue. The character of the exhibition—focused on both improvisation and dialogue—invites the visitors to leaf through the books, to take a comparative view, and also to discover motifs threaded through the history of photography. Liberated from their library-based order, zones of indeterminacy arise between the books and the images, but also purported affinities between the displayed objects, which possess no inherent proximity.

The arrangements of photographs on the tables fluctuate, in terms of the recourse they take to museal forms of presentation, between archival selection and a free compilation of images. As a typical instrument for imparting knowledge, the horizontally aligned display structures the visual material in differently designed chapters and continues the pictorial dialogue as spatial interplay. This setting harbors references to possible sources of inspiration for Lempert’s own artistic practice, yet the material is arranged in such a way that form- and content-related design patterns are apparent among the books, as well as narratives, typological features, and associative connections. Amid this juxtaposition and cohabitation, different visual contexts give rise to intensive and sometimes even bizarre dialogues.

The horizontally tipped view encourages perception that is more akin to reading and studying than to observing; it wanders across pictures and book pages, homes in on details, attempts to tap into contexts, and discovers surprising correlations. Eschewing an overt thematic rigor, various publishing genres and their own respective logic of design are superimposed. Associative contexts move different subject matter into seemingly obvious affinitive relationships, making similarities in form evident.

Already in 2014, in the scope of the exhibition series “… im Archiv,” Jochen Lempert spent time examining the artist book collection of Christoph Schifferli in Zurich. Lempert went on to combine his own archival prints with a selection of Schifferli’s books. Focusing on the extent to which a designed book and a photograph are able to mutually communicate, and on where the boundaries between the two run, the artist created dialogues on various levels: pictorial analogies based on book concepts related to form or content were positioned next to typological relations of similarity between art and book. Photographs inserted directly into books encountered pictures placed next to a book, or even solitary bibliophilic works. The subjective nature inherent to the collecting of artist books is mirrored in the artistic strategy pursued by Lempert, who has developed a subjective system of different correspondent relationships and views the book with a special eye to its dimension of aesthetic design.

For the exhibition “Publishing as an Artistic Toolbox” in Vienna, presented in 2017 at the Kunsthalle Wien, artists were invited to choose one of their own books along with three other publications that are important to them. Lempert made his selection based on content: besides his own book Phenotype and Peter Piller’s Von Erde schöner, the book Flies: The Natural History and Diversity of Diptera by Stephen A. Marshall and the photobook Tête d’or by Jean-Luc Mylayne were on display. About Mylayne’s catalogue, which was published in 1995 to accompany an exhibition at the Musée d’art moderne de la Ville de Paris, Lempert remarked: “Not a very beautiful book, but a good way to see his photographs. I vividly remembered the picture with a pipit in red Salicornia—a synesthetic experience.” And on Marshall’s natural history of flies, he noted: “A book with at least one surprise on each page! Have you seen those tiny flies on your windows with the characteristic stop-go movement? They are Phoridae—or coffin flies: read page 301–305.”1

The question fielded by Walter Benjamin as to whether “the invention of photography had not transformed the entire character of art,”2 since reproduction liberates the artwork from the context of its creation and opens it up to a new reading, surely would be emphatically affirmed by Jochen Lempert. The uniqueness of the artwork solely survives in its specific physical presence—with the exception of the photograph itself, which affirms the principle of reproduction as a parallel existence at various places, in different formats, as a print or as the page of a book. The exhibition in Graz fosters such parallels through image, text, and space. The work becomes part of a larger whole, of a spatially based composition of book and photograph, in which the archival order of the library, its thematic and alphabetic cataloging, is dissolved in an arrangement that brings together that which would hardly engage in contact on the shelves otherwise.