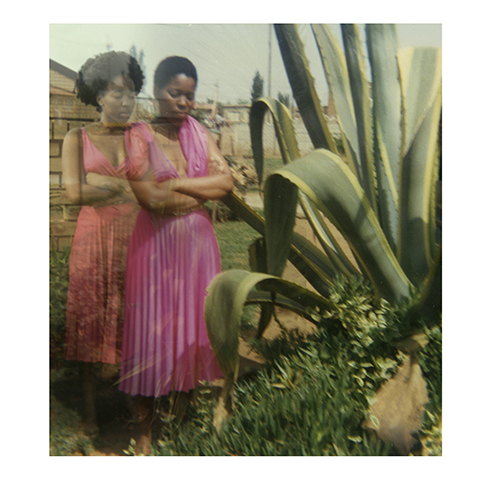 The jury founded their decision to honour Lebohang Kganye with this award on the following statement: “Lebohang Kganye’s animated photography offers an inventive look into her own family’s histories, and by implication the wider history of the South Africa from before and during Apartheid. We find her work to be bold, serious and playful in equal measure, while also being aesthetically innovative and politically relevant. By unfixing and reimagining the family photo album, Kganye investigates the instability and unreliability of memory in relation to personal and collective narratives. In her project ‘Ke Lefa Laka: Her-Story’ (2013) she does so by channeling her late mother through found photographs, inserting herself alongside her in photographs, and acting out her mother while wearing her clothes. Her mother was important for Kganye, ‘because of Apartheid and the history of our country, there is an absence of fathers in a lot of black families. I was raised by women in that sense, because, you know, fathers and husbands were gone for multiple reasons.’ In the follow-up series ‘Ke Lefa Laka: Heir-Story’ (2013) she dresses up as her grandfather, and through this act looks deeper into his opposition to Apartheid politics. She continues such explorations in her ongoing series ‘Reconstruction of a Family’ (2016–), where she tries to locate her family’s history and plays out the stories she has been told about her forebears. The jury considers Kganye’s work an important contribution to the global photographic scene and wishes this award to be an encouragement for her further artistic endeavours.”

Lebohang Kganye, born 1990 in Katlehong (ZA), is an artist living and working in Johannesburg (ZA). Kganye received her introduction to photography in 2009 at the Market Photo Workshop in Johannesburg, and she completed the Advanced Photography Programme in 2011. She also graduated with a degree in fine arts from the University of Johannesburg in 2016 and counts among a new generation of contemporary South African photographers. She was the recipient of the Tierney Fellowship Award in 2012, leading to her solo exhibition “Ke Lefa Laka” in Johannesburg. She was also awarded the Jury Prize at the Bamako Encounters Biennale of African Photography (ML) in 2015 and was the recipient of the Contemporary African Prize 2016 in Basel (CH). Kganye recently received the award for the Sasol New Signatures Competition 2017 in Pretoria (ZA), leading to a solo show in 2018. Her work forms part of several private and public collections, most notably the Carnegie Museum of Art in Pennsylvania (US) and the Walther Collection in Ulm (DE).

Lebohang Kganye’s work has been published in Camera Austria International no. 144/2018