The resistance of photography

with
Lisa Holzer (AT), Sabina Hörtner (AT), Werner Kaligofsky (AT) Ulrike Lienbacher (AT), Barbara Probst (DE), Klaus Schuster (AT) 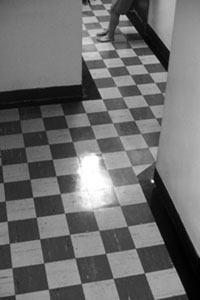 The exhibition “The Resistance of Photography” – like previous Camera Austria exhibitions – looks into the importance of photography as a medium that cannot be reduced to technical or aesthetic aspects but which is instead characterised by a specific form of examining contemporary culture: photography as visual thought and as a cultural practice, the image as the point of intersection of knowledge, history and memory. From this perspective, photography is constantly and indispensably fighting against being regarded as an aesthetic surface, against being reduced to a supposed “photographic” or being declared anachronistic.

The resistance of photography

The exhibition “The Resistance of Photography” – like previous Camera Austria exhibitions – looks into the importance of photography as a medium that cannot be reduced to technical or aesthetic aspects but which is instead characterised by a specific form of examining contemporary culture: photography as visual thought and as a cultural practice, the image as the point of intersection of knowledge, history and memory. From this perspective, photography is constantly and indispensably fighting against being regarded as an aesthetic surface, against being reduced to a supposed “photographic” or being declared anachronistic.

The projects and series of LISA HOLZER – evolved from a synthesis of painting, sculpture and photography – revolve around aspects of emptiness, blank spaces, indeterminate spaces and places whose association, function and context is not apparent. Hence the pictures above all depict ideas of places at which something has yet to happen, places that may be the possible points of departure and beginnings of narratives, places that allow and fulfil yearnings, places that may, quite generally, stand for possibilities. What is a place, or rather: what is the “right” place?

SABINA HÖRTNER’s interventions cause spaces and places to appear as interfaces between many spaces and places that are interconnected but nevertheless different; together, they form a system of practices to which her work hitches up. The condition for this approach is an analysis of the specific spatial context – an “image” of the respective situation emerges. The interventions themselves cause shifts in this visual, aesthetic, but above all political and social constellation of space and place.

In WERNER KALIGOFSKY’s works, in which a translation from one medium into another often plays a key role, the focus is always on the image as the disputed, contested “terrain” of the creation of meaning and, connected with this, on a hegemony over the description of reality. For this reason, they are equally profoundly political works that portray representation as a means of giving meaning to the world in such a way as to serve one’s own specific interests.

In the photographic works of ULRIKE LIENBACHER – that are always made in close connection with her drawings and sculptures/installations – we see a marked interest in the relation of body and identity, above all an interest in the female body. Thus, Ulrike Lienbacher’s work is also about the photographic image as part of a powerful politics of representation, an economy of the image as an economy of power – an economy that is constantly forcing the image into new contexts of the production of meaning.

BARBARA PROBST’s series “Exposures” showcases a fleeting moment for multiple cameras: exposure – uncovering, revealing – as synonyms of photographic practice are enacted and at the same time put into perspective. The artist relates them to a paradigm of photography, the facticity of the moment, but breaks down this moment into different perspectives that are, per se, both true and insufficient. Facticity, then, is a construct, with omissions and contradictions being part of photographic practice itself.

KLAUS SCHUSTER’s works appear as alien stills, taken from the mass media image machine or from memory, that is, in turn, also based on images. The result is an ambiguous universe of technical images that both underline and show the absurdity of the “apparent reality” of photography. The pictures seem to have penetrated the objects, replacing or superimposing them. Images of a world that confirm and yet no longer need this world.

Particularly the new pictures of a young generation of artists showcased at the exhibition reveal very different approaches to and uses of photographic dispositifs. The diversity of these positions corresponds to the diversity of possible interpretations, the diversity of photography as a possible space of cultural action, as an active cultural process that becomes inscribed in manifold discourses – be they socio-economic, political, aesthetic or related to media history, etc.: by drawing on cinematic structures, by constantly redefining the documentary by means of digital methods of simulating photography, by reworking and appropriating image media and genres, or by means of interventions in the form of installations. These strategies are constantly repositioning photography in the field of tension of document and construction. Ultimately, it is a question of a concept of photography that does not codify photography, but rather describes how photography poaches around many different discourses, as it were, appearing in unexpected places, and offering surprising consequences – an exciting space for pondering current visual cultures as a whole.