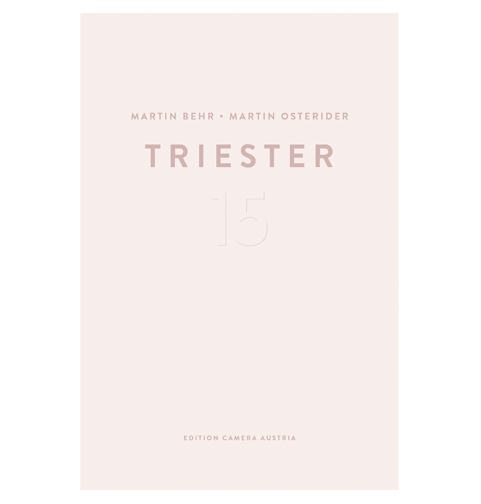 Since 2003 the artists Martin Behr and Martin Osterider, both born 1964 in Graz, have been embarking on photographic forays into the Triester district of Graz, where they grew up. They always follow the same familiar paths, which both had regularly taken as children on family walks. Since 2013 the book series “Triester” has been published as part of Edition Camera Austria—as an interminable image archive about an urban district, as a mapping of a public space that is time and again disappearing and that therefore seems changeable and always contemporary. But the artists’ visual archive extends even further back. Volume 15 of this publication series shows a selection of photographs from their family albums, thus reaching back into a time when photography—in different formats, materialities, and manners of use—became part of everyday family culture. It is not about nostalgia, but about the reconstruction of an ongoing and ever-changing relationship between public and private, which has always been shaped by photography.

The 15th volume of the “Triester” series, which was initiated by the Graz-based artists Martin Behr and Martin Osterider, is devoted to historical photographs of the Triester estate in the neighborhood of Gries. Pictures from around six decades were selected from the rich family archives of the two artists. The photographers are either parents, siblings, or friends and acquaintances of the two families. The photos published in Triester 15 originate from a time before any concrete plans for the “Triester” project had been made; the volume is meant to be understood as a photographic prequel to the book series published in the Edition Camera Austria.

Triester 15 contains black-and-white photographs from the adolescent years of Martin Behr and Martin Osterider, which they had once developed themselves in makeshift darkrooms. Other images originate from a press photographer, from family members, and from neighbors. Here, the focus is on people, with the housing estate as the backdrop. The bonus images from the Kodak company, in turn, exude a 1970s flair. The second picture, which is smaller, on the Bonus Photo strip could be cut out and given away. Motifs include the first day at school, the celebration of first communion, but also the view seen from a balcony. The latter was documented again and again by instant photographs, which at the time was still a technological innovation.

Traditional color film was used to capture the life of the generations—such as grandparents playing with their grandchildren and working in the garden. Photography became a medium for preserving scenes from everyday life. Many years before the idea for the “Triester” project took form, Behr and Osterider started using their cameras to conduct architectural research in their living environments (each on their own). They devoted their attention to the special architectural characteristics of the Triester housing estate, such as the Karlau justice center, the slaughterhouse premises, and the concrete jungles along the periphery. Or they documented long-since-closed grocery stores or dry cleaning businesses like Record Kleiderreinigung. The photographs in Triester 15, despite differences in terms of form and content, merge to create a kind of kaleidoscope of the private sphere. It conveys the atmosphere of the Triester estate, while simultaneously also telling stories about how the use of photography in a private context evolved over the decades.

From the photo meant to serve as a test for the newly acquired telephoto lens, which resembles a surveillance shot, to explicit notices for the neighborhood: “This is not a dog toilet!” From experiments with layouts of four images to studies of nature in an industrial ambience: Triester 15 is immersed in a visual inventory of the past and facilitates an exploration of the Triester estate and its residents through subjective points of view, along with the different formats and materialities of photography. “It is not about nostalgia, but about the reconstruction of an ongoing and ever-changing relationship between public and private, which has always been shaped by photography,” as Reinhard Braun (Camera Austria) aptly notes.