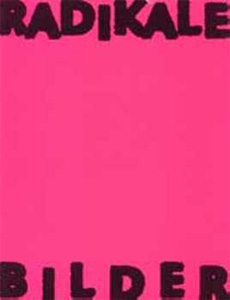 The title RADICAL IMAGES serves as a screen onto which various fractures, disruptions, and questionings, in the social and cultural spheres as well as in that of art, can be projected. Thirty-nine international artists were invited to create a new work, based on their previous oevre but specially produced for the triennial and in relation to its theme. At the centre of the concerns addressed by artists and curators alike was the question as to how photography is to radicalise itself if it is to continue to play a part in the construction and interpretation of contemporary reality. Seen from this angle the role of photographic images in systematically mediating between the world around us, society and the individual becomes central to a debate that is not confined to the arts but concerns culture as a whole.

It is not only the methods by which art can approach external systems that are radical, however; it is the basic understanding of art as part of a larger structure of systems — a structure that keeps dissolving and reassembling itself in a different shape — in which radical aesthetic decisions need to be taken. At present RADICAl IMAGES are possibly alone in contributing documents and interpretations based on this perception to the vast pictorial and media archives that exist today.