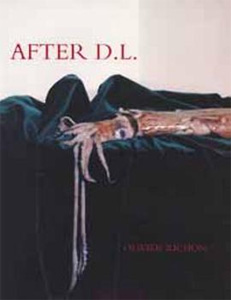 After DL are still lives, the lowest genre within a hierarchy of subjects. Fish and vegetable, all from the market place and all from beneath a surface – earth or sea, are being elevated on a mantelpiece. Yet they are like a stain on the draped velvet, just as the inscription of the names of the Cynics are a stain on the geometrical and somehow platonic space of the picture. These signs may be used as markers for a conversation on taste.  How is it that taste as sensation is what the judgement of taste, predicated upon vision, excludes? At first, sight and taste are very different. Kant almost opposes them; for him, sight may be called an objective sense in as much as it gives us more knowledge of the  external object. Taste is more subjective, as objects enter into contact with the mouth and dissolve in the palate with saliva. Taste has more to do with delectation. It is close to smell, as with smell air enters and dissolves in the body. By emphasising taste as sensation and by linking it with photography, can we propose a metaphor of consumption which displaces the  dichotomy between production and consumption?

If one says that the camera consumes objects, and incorporates them to transform them into signs, we do not merely call attention to orality but also to an aspect of the means of representation proper to photography. One may then reclaim that photographs are analogical signs, not in the sense of unmediated signs, but in as much as analogy is a form of incorporation and assimilation: a thing becomes like another. Analogy as Kant defines it: a perfect resemblance of two relations between entirely dissimilar things. Is this a form of gastro-semiotics, where the lens sucks objects, where the production of the image is predicated upon the consumption of its referent? Photography has a particular relation to objects; it is cumbersome as one needs things in order make an image of something. One is close to the situation imagined by Swift for language; deriding  the idea that words are substitutes for things, he suggests that we would take with us all the things we wish to talk about; the more one has to say, the more things one has to carry on one’s back, at the risk of being crushed by their weight.