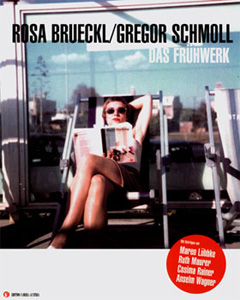 “The Early Work” offers a comprehensive synopsis of the pictorial work of the austrian artist couple Rosa Brueckl / Gregor Schmoll (both born in 1970). On the one hand, the title of the book suggests that Rosa Brueckl and Gregor Schmoll intend this publication to conclude a phase of their work while, on the other, it refers to a fundamental conceptual idea that inheres in all of their works: their work can be described as a permanent, conscious process of inscribing into the history of images. In their work, Brueckl / Schmoll react directly to historical models whose denotation is always clearly visible despite the fact that they undergo a process of transformation in their adaptation of new media. With the aid of their methodically deconstructivist approach and their wide system of reference, Brueckl / Schmoll deliberately enter into the art discourse, thus making it clear that they wish their works to be seen as part of this discourse.

In addition to a chronological synopsis of their works, the book includes four accompanying texts that focus on different aspects of the work of Rosa Brueckl and Gregor Schmoll: treatment of the new media (Anselm Wagner), the artistic strategies and practices (Cosima Rainer, gender relations and the role behaviour of the artist couple (Maren Lübbke), and appropriation and the public sphere (Ruth Maurer).

Rosa Brueckl and Gregor Schmoll had their major appearances mainly in Austria over the last years, 1994 at the Kunstverein Graz, 1995 at the Secession in Vienna or 1998 at the “mezzanin” gallery in Vienna. They are currently working in Paris.