“Symposion on Photography II” is a  special reprint of Camera Austria No.4. 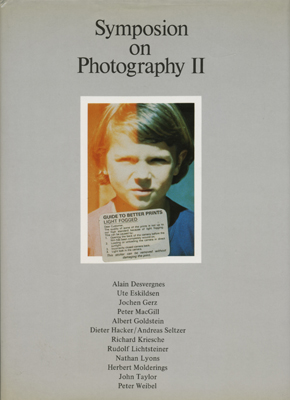 The Symposion on Photography II, which took place in Graz from Oct. 20 to Oct. 22, 1980, was the contribution of the Fotogalerie im FORUM STADTPARK to the Styrian Autumn 1980. As at the first symposion (1979, see p. 103) no particular topic was specified: the participants were invented to talk “about photography” – from their own subjective point of view. Considering the broad spectrum of reactions to the key-word “photography” collected in this volume, the present publication can be viewed as an attempt at defining the current state of contemporary thought on this medium. Thus it might be pointed out, for instance, that, compared to the first symposion, photography this time is approached with far greater scepticism and that this critical attitude was presented with much greater force than in the preceding year. Taking to heart the criticism voiced by some regarding the relative absence of practicing photographers from this year’s symposion, we have decided that the Symposion on Photography III shall be devoted exclusively to what has always been our true concern – to photographs. From Oct. 18 to Oct. 20, 1981, photographers will present their recent work.
We thank all participants for their permission to reprint their texts and we hope that the present publication will meet their standards, too. Its delayed appearance is due partly to its volume, partly to the limits imposed by our own working energy, which is not boundless, and to a considerable extent also to the fact that some mail from the U.S. disappeared along the way.
At this time, we would also like to thank the Styrian Autumn and the Bundesministerium für Unterricht und Kunst without whose financial assistance the symposion as well as the present publication would never have been possible.