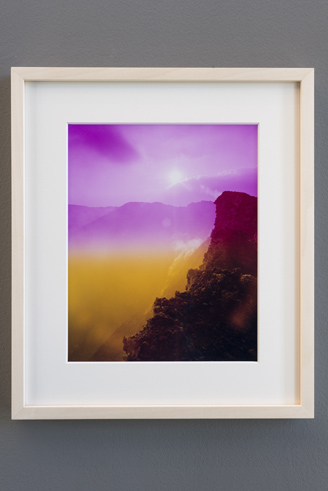 In August of the year 2016, Markus Krottendorfer embarked on an expedition into the Kong Mountains of Africa, following the trail of the expedition undertaken between 1795 and 1797 by the Scottish explorer Mungo Park along the banks of the Niger River. It was in Park’s travel journals that the mountains were first recorded on a geographical map. Dramatic and picturesque landscapes were awaiting the travellers, overwhelming beauty and unknown threats. The pictures that the artist took of this journey attest to a stark remoteness, not only of history but also that which can be seen on the expedition today. Employing filters on site, Krottendorfer bears witness to the impossibility of the act of documenting, of trusting in one’s own gaze and in one’s own images.

Is the point here to imbue the photographs with even more beauty, or rather, in fact, to rob them of their beauty? Does the colouring and recolouring of the pictures increase their sublimity, or does it substantiate a necessity of distorting the images beyond recognition? How many filters are applied to photos before we actually see them and speculate about their meaning? How many times have we been deceived by pictures, misled or subjected to erroneous assumptions? The Kong Mountains only existed for several decades, despite never having been real at all and despite having remained manifest as apparitions on various maps well into the twentieth century. Does this involve a history of deception? Certainly. Does Markus Krottendorfer confront us with a reenactment of this deception? Certainly. Instead of being motivated to set right against wrong, the artist seeks to reconstruct the establishment, associated with far-reaching consequences, of the undecidability of this question about deception or truth. The place harbouring the undecidability of this question itself signifies, in the present day, a place for exercising power.