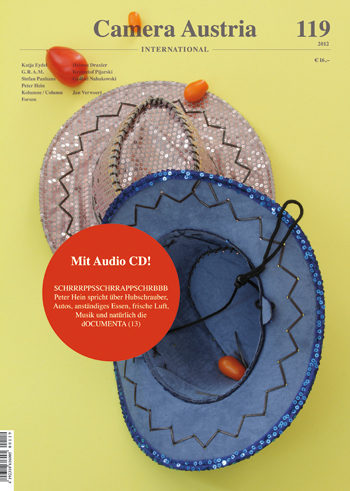 Questions addressing the documentary and the politics of photographic images, as we have been continually bringing up over the past year, inevitably lead to questions of the images’ plausibility, authenticity, and the forms and strategies employed in their staging. What guise do political acts take in the photographs presented by today’s media? And how do artists go about exploring such modi of rendering the political in their own works? Are they for instance guided by questions of whether a common space of experience and knowledge may even be detected, or reconstructed, here? Or perhaps artists wonder which conflicts and subtexts are staged in the form of images and specifically which are not? Where are the pictures implemented in an instrumental way and to what ends?

In issue no. 119 of Camera Austria International we are introducing you to artists whose photographs reference the aforementioned fields. The artist collective G.R.A.M. (Günther Holler-Schuster and Martin Behr) has for many years been consistently working with re-enactments of political images, many of which have already entered collective memory, while others— the parliament scuffles or the current series on financial and bank managers—are presently influencing the pictorial world of the financial crisis. Krzysztof Pijarski, in his essay, seizes on the aspect of media presence as a form of speculation, as a kind of virtual capital and its mechanisms, so as to explore the re-enactments that G.R.A.M. stages. Pijarski elaborates how the two artists unveil these mechanisms of the media world as contemporary surfaces where events come to the scene, as an engine for producing (temporary) visibilities. And he wonders, taking recourse to G.R.A.M.’s photographic re-enactments, whether the “… aligning of financial economy with the economy of attention is much more than a mere analogy, and that the crisis we’re still in is in fact also a crisis in (the distribution of) representation”, with an aim to re-orient our relationship to images.

Stefan Panhans, in his video and photo works processes linguistic and aesthetic clichés reflecting current lifestyles and consumer gestures: “BUT MOST OF ALL YOU SHOULD KNOW THE FOLLOWING: A high accumulation of chi can lead to positive results in terms of health, harmony, and success.” The indices he has developed as part of the on-going photo series “Items For Possible Video Sets” (since 2009) can be read, as Gislind Nabakowski has noted, “as combinatorics of controversial social spaces” that are immersed in a “game-is-over” sagacity: “His art is not hyper-affirmation, but rather art of the present. The view of turbo-capitalism is never idealised to a state of transcendence. Instead of delicate tablecloths fashioned from Brussels lace, we encounter exposed concrete, sand deposited on the grunge of autumnal plastic waste, colourfully galvanised trinkets … practical-joke devices, crumpled foil, flour instead of wall plaster, or transparent film as a user’s manual for monitors and printed with a written Asian code. In any case, no rarities amidst the wealth of material from the global marketplace. … [A]n all-over spread of granola, almonds, text snippets, stubs of coal, and sticky crumbs are picturesquely strewn across and thus cover a soft-porn image. The all-over as eraser of pornography.”

While Gislind Nabakowski’s contribution is guided by the “precarious signs” ascertainable in the photographs of Stefan Panhans and their potential meanings, so as to trace the combinatorial flotsam within photographic, object, and material collages, Helmut Draxler in turn concentrates on “social vocabulary”: “In terms of content, Katja Eydel’s works usually thematise times of upheaval and the realignment of circumstances: the ‘Invention of Turkey’ with its Kemalist institutions; the new Berlin after the reunification of Germany, and especially its peri-urban manifestations; the Belgrade caught between various fronts during the NATO bombardment. New institutional, urbanist, and quotidian codes are constantly overlying the old ones, yet the fault lines remain discernible while the organisational forms of transition, the interim usages, the act of pausing in a transitory flux emerge forth.” And Draxler underlines how, in Eydel’s works, “people … do not thrive through their actions, nor the things through their usefulness, nor the signs through their functions” but rather that “the surroundings or the environments of the people, things, and signs are invariably posited as the points of focal interest; and this situational state may be understood in terms of the richness of relations between the three, as an objectification of people or as an anthropomorphisation of things, as a semiotisation of forms and as a formalisation of the relations themselves.”

Since after a visit to dOCUMENTA (13) we were left with the impression that it was able to credt themselves with substantial—and also questionable—distinctions in position, we felt it would be appropriate to leave the trails of classic art criticism behind and to invite Peter Hein, singer in the German band Fehlfarben, to write an essay on the exhibition. After receiving this document, we noticed that the sound of the text to some extent contrasted with the formal corset of our magazine, which is why we decided to tape his “Dokument zu Kassel” and have the author read it himself. So in this issue of Camera Austria International you will find, alongside a text excerpt accompanied by photographs by Anna Meyer, a CD with the spoken critique by Peter Hein. Enjoy!

The Forum section of the current issue is designed to set the mood for the European Month of Photography in Berlin: curator Katia Reich (of the European Month of Photography) and Felix Hoffmann (of the C/O Berlin) have selected—from the over 100 exhibitions that are opening as part of this European festival in Berlin this autumn—six photographic artists, who we are introducing to you here.