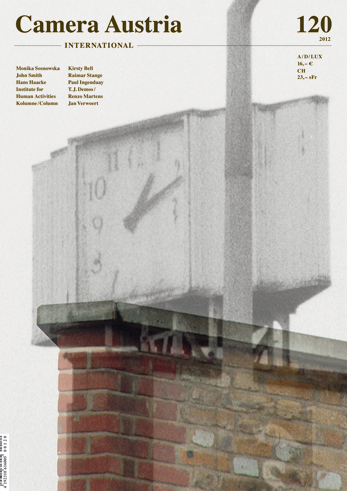 Recent years have seen a sustained privatisation of public space, a fact that has once again advanced to the focus of public perception, for instance through the Occupy Movement. This has inspired us to introduce to you, in the current issue of Camera Austria International, four positions—by artists taking disparate approaches and paths in their artwork—which explore forms of urban building politics and the effects on city residents.

The films of British artist John Smith, for instance, frequently revolve around architecture and built-up environments. Although they do not directly address current issues of gentrification, these films (some of which were already shot in the 1970s) deal with questions of (dictated) change pertaining both to urban space and to specific formations within society, and consequently often to questions of memory and loss. The functions of building and the needs and interests of the individuals using this space are frequently counterposed, thus making the urban space appear dysfunctional.

The photographic working archive of Monika Sosnowska serves the artist as an “extra memory” for her sculptural endeavours—her work that is “steeped in Poland’s psycho-architectural legacy ”. The photographer shows the effects of the new internationalism and the economic liberalisation found in Warsaw after the dissolution of the People’s Republic of Poland: “Throughout Sosnowska’s archive, a triangular contingency is apparent, between the man-made, nature and people. They work on each other like physical forces, creating and constantly modifying the lived environment” (Kirsty Bell).

On the occasion of his large retrospective at Museo Reina Sofía in Madrid, the German conceptual artist Hans Haacke created a work by the name of “Castles in the sky” (2012) thematising the Spanish real-estate catastrophe. In the outskirts of Madrid, he found an agglomeration of half-constructed buildings—landscapes of ruins that belong to everyday visual life in Spain and represent an expression of the burst real-estate bubble that has brought an entire country to the brink of ruin. “Hans Haacke’s installation takes on exemplary significance in this context, for his multimedia penetration of Ensanche de Vallecas exposes the attributes typical of the voracious urbanism of the Spanish boom.” (Paul Ingendaay).

“If we feel art should fully embrace the terms and conditions of its own existence, it may be good to inquire where art has a bigger impact on social reality. Is it at the sites where critical artistic interventions take place or at the sites of art’s public reception, in the galleries, museums, and at biennials where these pieces are subsequently shown, discussed, and sold?” Seizing upon this question, the Institute for Human Activities (IHA), initiated by the Belgian artist Renzo Martens, founded a five-year gentrification programme located 800 kilometres up the Congo River from Kinshasa. T.J. Demos was on site and carried on a conversation with Martens about his provocative project. In the process of shaping the programme it became clear that “this system will constitute the mandate of the art and the value of its criticality”, for “institutional critique ultimately is beneficial to only some areas of the world”, as Renzo Martens has noted.

This edition of Camera Austria International concludes Jan ­Verwoert’s four-part column “Image as Witness”, where he exposes “visions of the future” that promise happiness in display windows of real-estate agencies, among other places, as forms of snatching the soul since they feign normality within society. His column therefore congenially compliments the four monographic artistic contributions touching on the themes of dreams, debt crisis, and contemporary depression.