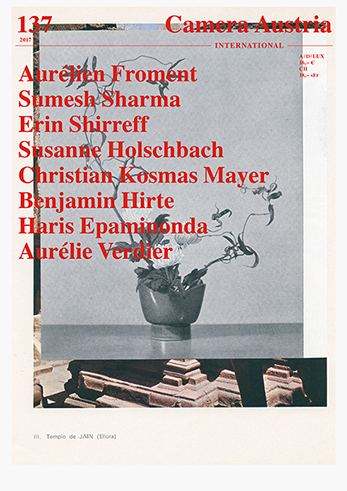 During a period of difficult and confusing societal and cultural transformation, where the question of differentiation between the truth and the real appears to be made ever more impossible, it may well be important to move the gaze from the centre towards the peripheries—as we already did in the previous issues. We must depart from the desire to see, to recognize, and to understand, or we need to redouble our efforts to mediate the visual aspect of imagery in a “system of documentation” (Douglas Huebler) in order to be able to foreshadow the origins of these transformations and their undreamt consequences.
In several recent projects, this unease at witnessing the end of representation alongside a crisis of sovereignty plays a role, the disappearance of the intellectual from the public sphere and making room for a kind of intellectual DIY existence and its viral televisionary and networking performance—a crisis where images, in many respects, are more than simply just involved. The closer the images come to the events, the less we see in them, as Hito Steyerl has already noted. By contrast, in everyday life we must also recognize that the “protocol of iconization” of images, as Ariella Azoulay terms it, continues to be in a position to assert its validity: to see what is visible, to label the images according to what they represent, and to identify what they seem to represent—while (mis)understanding both as a kind of description of reality. So where does the question of the peripheries of the images lead, their margins, their passages from one image to another one, or from imagery to the domain of things, artefacts, narration, incidents, history, or even politics?
According to Aurélie Verdier, the photographs by Haris Epaminonda institute a poetic metamorphosis of interstices and touch an exteriority shot through by disappearance or erasure, engendering zones of memory in a stance of watchfulness, always open—the construction of transitions between “crystals of historical unreadability”. In the work of Erin Shireff, too, we find a tension between parts and the (absent) whole, as Susanne Holschbach describes it, where photography acts as a hinge between the various project indices, as a trace of the connection and disconnection of different points of reference. In the work of Christian Kosmas Mayer, this transitional trace is likewise evident. Initially, writes Benjamin Hirte, we come upon a situation that is ostensibly readable. And then the appendix is opened up, revealing moments of the enigmatic, which remain tied to stories, to history. Sumesh Sharma describes the practice of Aurélien Froment as both spanning and expanding genres, extending the reach of conceptualism beyond popular theoretical positions like post-Internet art. His films in particular are made in cooperation with locals and often navigate the precarious field of postcolonial representation.
Discernible in the strategies employed by the artists featured in this issue, therefore, are cues to constructing places for these images within the crisis of representation. However, in these places they assume functions through which they not only show or perhaps even show least, but rather occupy and mark transitions—transitions between scattered and suppressed crystals of unreadability, between inventions, milieus, memories, both found and fabricated. The images—both moving and static—thus traversing unsettled spaces of form and meaning that can only become visible along this transitionary spaces. Periphery and margin are situated within these transitory spaces within the production of visibility and invisibility itself, where alertness and diligence are necessary for recognizing which of the two not only caters to the real, but rather, still, gives a hint of the possibility of truth.