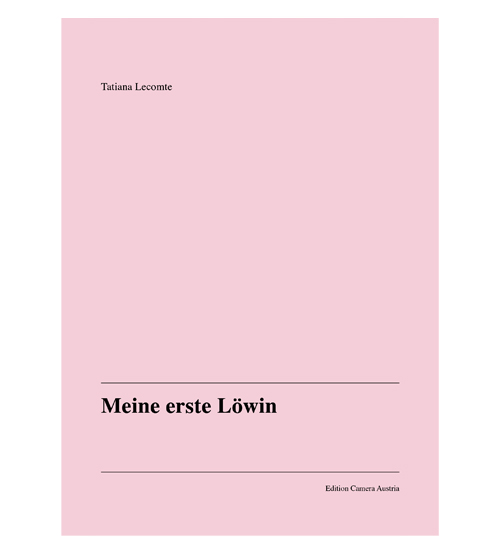 The photographic source material, which Tatiana Lecomte liberally appropriates, which she “borrows”, to use the artist’s own words for her approach, is to be seen not only in a general historical context but most especially as being anchored in the history of photography. Images that document African safaris and stylize the slaying of animals as heroic feats, photos of animal husbandry showing a romantically glorified view, medical imagery, illustrations for cooking recipes, underwear advertising. In her work, Lecomte repeatedly references history as a laboratory for power and violence, a laboratory that is also dominated by gazes and imagery. She assumes the role of the one who shows what could already been seen and thus remained hidden and secret during the act of making visible. Meine erste Löwin (My First Lioness) is a montage, but it also signifies reflection on the principle of montage—and ultimately on the possibilities and conditions of photography itself.

Being on the lookout.
This is a strategy adopted not only by big-game hunters, positioned atop a craggy peak scouting for something to train the next shot on. His body is resting on the rifle and his hand held up to shield the eyes. His gaze is protected from the sun and focuses on all moving elements in an otherwise very calm landscape.
Mit Blitzlicht und Büchse.*
Being on the lookout for existing images, in books that have become obsolete, in scrap collections, at any given opportunity—being on the lookout for already discussed topics, for already designed formats, for affinities, similarities, and correlations. Being on the lookout is also the strategy employed by Tatiana Lecomte in her artistic work with and about photographs.
Being on the lookout is photographic agency. Being on the lookout targets image content. Photographers move their bodies into position in order to be on the lookout—they take a stance.
Lecomte is a photographer, yet she does not work with conventional photographic methods. As opposed to the big-game hunter preluding the artist’s book Meine erste Löwin (My First Lioness) and in departure from conventional photographic practice, the artist’s relationship to her own object of study, the medium of photography, is influenced by a state-of-being-found rather than by the viewfinder and the act of seeking. The photographic source material, which Lecomte liberally appropriates, which she “borrows”, to use the artist’s own words for her approach, is to be seen not only in a general historical context but most especially as being anchored in the history of photography. Images that document safaris in Africa and stylize the slaying of animals as heroic feats, photos of animal husbandry showing a romantically glorified view, medical imagery, illustrations for cooking recipes, underwear advertising. The majority of the photographic material processed by the artist originates from the first half of the twentieth century. Still today, it is invariably inscribed into collective visual memory that has recently been set into motion due to the increased circulation of subjects in digital space. Lecomte liberates the photographs from their historical context and reintroduces them into the present-day current of images in the twenty-first century. The artist systematically showcases image types with aesthetics that are still relevant today by juxtaposing, for example, the portraits of African tribal members, of a German dog breeder, or the figure of the big-game hunter through pictured gestures, formal analogies and, not least, through the all-levelling omission of colour, and also by thematizing repetitive patterns.
Paradiese.
Serengeti darf nicht sterben.
The lioness is dead.
The paws of the animal are gone. They are now trophies. Its body has been cut up and is lying on the ground in the dust like a no-longer-needed commodity—shot dead, pruned, discarded. The allure of the quest has long since evaporated. The viewfinder has served its purpose.
Das Haustierbuch: Vom Wesen, der Schönheit und dem Nutzen unserer Tier-Kameraden.
Auf Tiersuche in weiter Welt.
Lecomte crops her photographs according to each aspect, each detail, that is relevant to the construction of her narrative. The artist crops rendered bodies, she crops the mediatic bodies, and she prunes her own image content and formats. The rest is used elsewhere or simply discarded. This is a practice that may be criticized for slighting—with respect to the idea of the original and its author—the photographic material. However, Lecomte is in fact showing respect for the photographed subject by assessing the photo as a profane commodity and also treating it as such, free of nostalgia and idealization. It is an attempt to liberate the lioness from her function of being killed for the photograph alone. For the documentation—for the fur and for the photo.
“Take no liberties with dangerous animals.”
Meine erste Löwin joins the ranks of a list of yet undefined books. Page for page, sheet for sheet, always following the linear course of the book as a means of expression. The repro-photographed pictures from books are interwoven in Meine erste Löwin; they are interrelated on the surface of the individual book pages and also concatenated in terms of content. One pictorial element gives way to the next, a form repeats and repeats before moving on to the next one, the gesture of a depicted person becomes the unwitting movement of an animal and then becomes a deliberate gesture once more. The left page of the book complements the right one, the right one contradicts the subsequent page, that is, the left one. Leafing through the book, turning the page, disrupting one’s own syntactic construction, abruptly ending the sentence and continuing it elsewhere, allowing the text to fall back on itself again and again.

* With Flash and Rifle. This is a volume that was not published in English.Other German titles that appear in the following include: Paradises; Serengeti Must Not Die; The Domestic Animal Book: On the Nature, Beauty, and Benefit of Our Animal Companions; On a Search for Animals in the Great Wide World; Red Berry Compote; Breeding and Training Dogs; Dermatology; Gari Gari: The Call of the African Wilds; Practical Breeding of Angora Rabbits and Wool Harvesting; Mysterious Islands of the African Tropics; Types and Animals in the Sudan; German Birds of Prey; Africa: Dream and Reality.