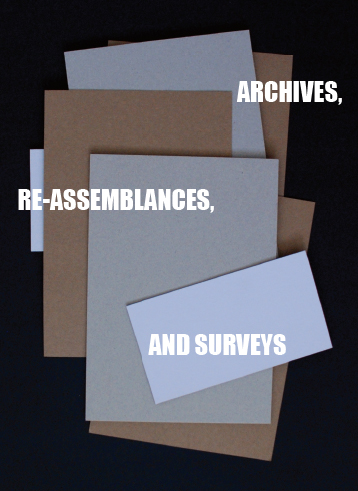 One of the main topics, which was beginning to emerge in the research for the project, is the use of (also private) archives and/or found photographic material, be it in books, magazines, or newspaper archives whose inventories are auctioned off online (Lecomte, Witek, Mayer). Then this material is—second main topic—rearranged, amended, edited and extended; its meanings are revealed or translated into a different narrative or medium (Lecomte, Krüger & Pardeller, Witek). Eventually, strategies of surveying of social as well as cultural and urban spaces emerged, where photography was used on the one hand as a form of documenting processes (Höpfner, Holzfeind, Six & Petritsch, Strasser), and on the other, as a form of intervention itself (Bitter & Weber, Nimmerfall).

After conceptual Croatian photography as from the1960s was presented in a Camera Austria exhibition between March and June 2013—»ZERO POINT OF MEANING«— this exhibition project attempts to open up a space of resonance for the question of the conceptual discussed in the exhibition. With this in mind, this exhibition project does not aim at giving a summary of current positions but will pay particular attention to photography as a field of possible cultural courses of action. This field can be described by interventions and (visual) scopes of action, by questioning what is constructed and produced by the images—collisions of different visibilities, meaning, and visual contexts. In this sense, it is about transitions between text and (photographic) image, between the documentary and the conceptual, the visual and its meaning, and between fiction and materiality of representation.