Sven Johne: Where the sky is darkest, the stars are brightest. 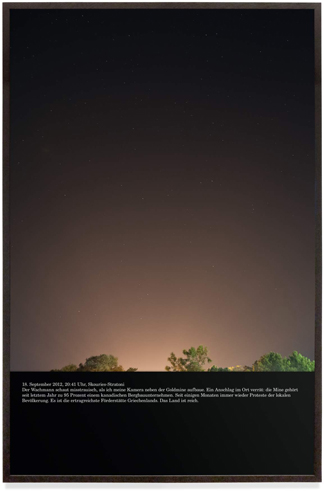 The suggestive field of documentary photographic form and its entanglement with texts, stories and history has played a key role in the photographic practice of Sven Johne since many years. In his work he systematically puts the focus on the relationship between what can be shown and what can be known about what can be shown. By doing so, he demonstrates again and again that documentary images do not exclusively belong to the realm of the visible and that dependence on the word, on knowledge, in short, on the power to attribute meaning is inherent to them. For his first comprehensive solo exhibition in Austria, the artist combines a selection of works from the past few years with topical projects that pointedly articulate our visual present’s precarious and controversial space of “documentality” (Hito Steyerl) that is increasingly contested in ongoing debates.

A monographic contribution by Sven Johne with a text by Susanne Holschbach was published in Camera Austria International 118/2012.