What Can Art Do For Real Politics?
Gastredakteure / Guest-editors: Artur Żmijewski, Joanna Warsza 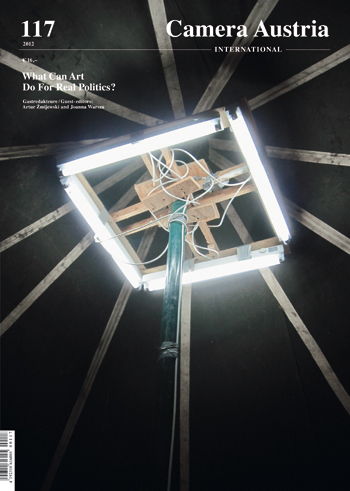 “It matters that as bodies we arrive together in public. As bodies we suffer. We require food and shelter. And as bodies we require one another in dependency and desire. So this is a politics of the public body, the requirements of the body, its movement and its voice” ­(Judith Butler).
During her speech at New York’s Zuccotti Park on October 23, 2011, Butler emphasised the necessity of proverbial physicality within the Occupy movement: this physicality, having found expression in the urban tent camps last fall that grew into autonomous organisms, signifies a tangible (in the literal sense of the word) interest in becoming involved in the production of politics, in touching it, in becoming part of it, and in changing it—on the far side of a potentially weak or even non-existent collective identity, and in defiance of the prevalent heterogeneity of different voices and groupings that were gathering there.
Read more →

The Present and Presence
MUSUM Ljubljana, a permanent exhibition

Museum of Affects.
In the Framework of L´ Internationale
MUSUM, Ljubljana
TANJA VERLAK

Camera Austria International No. 117 | 2012 has been published as part of a media partnership with the 7th Berlin Biennale for Contemporary Art.