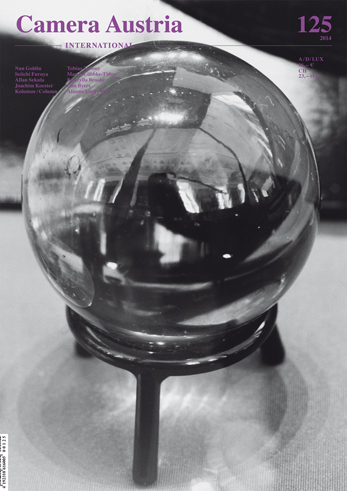 The point of departure for the issue at hand partially originates with the history of the Camera Austria organisation itself. In 1989, the cultural department of the City of Graz made an offer, on the occasion of “150 Years of Photography”, to support larger-scale projects in order to emphasise the significance of contemporary photography in Graz. The first related exhibition was called “No. 1 Stadtpark”, which was accompanied by an eponymous publication; it presented those artists who were working in the area surrounding the Forum Stadtpark in Graz, to which Camera Austria also belonged at the time. What is more, the magazine’s publisher Manfred Willmann had the idea to confer an award (of which there were very few at the time, even internationally) to honour the photographic artists associated with Camera Austria who have made “a noteworthy contribution … in Camera Austria since 1980” (as the statute reads). In 1989, the Camera Austria Award for Contemporary Photography by the City of Graz was thus presented for the first time—to Nan Goldin. Since then, it has been awarded by an international jury every two years.
All other artists that we are (once again) introducing in this issue have, like Nan Goldin, been recipients of the Camera Austria Award: Seiichi Furuya (1993), Allan Sekula (2001), and Joachim Koester (2013).

In the current issue Alanna Lockward starts her series of essays, which over the course of this year will make up the Column section. In our view, her project “Decolonial Aesthetics/AestheSis” and the related decolonisation of the gaze already in this issue provides an important extended framework for discourse on modernism and its production of visibilities.

Presented by the editors

Copyright © 2014
All rights reserved. No parts of this magazine may be reproduced without publisher’s permission.
Camera Austria International does not assume any responsibility for submitted texts and original materials.