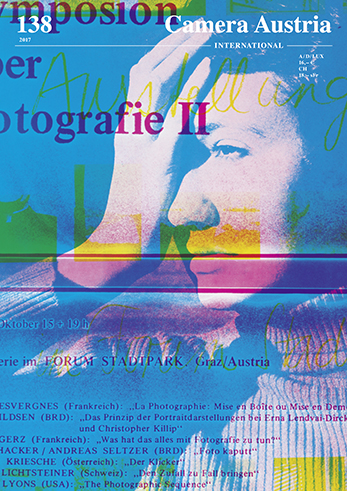 In recent years, Camera Austria has worked with many artists whose works deal quite directly with archive-related issues. The artists Özlem Altin, Sven Augustijnen, Eric Baudelaire, Martin Beck, Peggy Buth, Peter Friedl, Maryam Jafri, Tatiana Lecomte, Uriel Orlow, Ines Schaber, and Ala Younis, among others, construct in their artwork a kind of archive—temporary, provisional—and compile collections, taking the material found in archives or discoveries that lead to archives as a point of departure for their research. So on the one hand, the point is to imagine archives that do not exist but would be necessary, and on the other, to add something to archives that is lacking, that is repressed or excluded. Here, artistic practices also intervene in knowledge production in a more general way; they institute, as it were, methods of producing knowledge that is missing, and at times assume the functions of other cultural institutions in the process.

Copyright © 2017
No parts of this magazine may be reproduced without publisher’s permission.
Camera Austria International does not assume any responsibility for submitted texts and original materials.