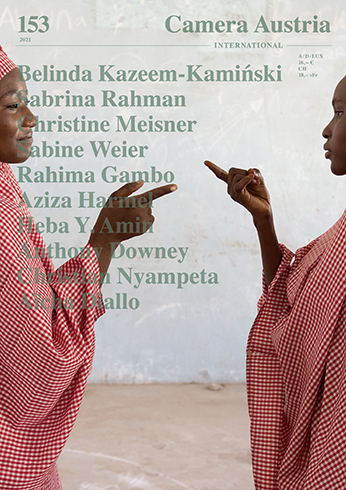 The artistic positions presented in this issue take very different approaches to dealing with opportunities for thematizing and reactualizing past experiences that also involve colonial or anti-Semitic violence, as well as to ultimately making them relevant to a contemporary context.

The artistic positions presented in this issue take very different approaches to dealing with opportunities for thematizing and reactualizing past experiences that also involve colonial or anti-Semitic violence, as well as to ultimately making them relevant to a contemporary context.

In her films, photographs, and assemblages, Belinda Kazeem-Kamiński explores the exposition and simultaneous invisibility of Black individuals in Austria. She traces suppressed histories that are kept hidden not only here, but in countless archives of the Western world: “In revealing the voids of the Eurocentric archive, the viewer enters an alternative world of possibilities, one in which racialized bodies of the past are conjured to make sense of the present,” as Sabrina Rahman writes about the artist’s work.

Since 2017 Christine Meisner has been investigating the archive of the anti-Semitic weekly Der Stürmer (The Stormer, 1923–45) in her extensive research project Unschärfe im Möglichen (Unsharpness in a Possible). She meticulously records and contextualizes the pictures sent to the newspaper’s editorial office by enthusiastic readers and raises the question of their complicity in the crime of the Holocaust. Sabine Weier, in her essay, points to the parallels between Der Stürmer and present-day groups that propagate anti-Semitism and hate on the Internet: “The senders of material were formulaically fueling a radical anti-Semitism extending centuries into the past, which since the mid-nineteenth century had been spreading rampantly in ever more threatening forms. Back then, the same myths were perpetuated as are being spread online today by QAnon members with their anti-Semitic world conspiracy narrative.”

Rahima Gambo is likewise concerned with vestiges of the past, which she assimilates associatively and as psychogeographic notes in her series A Walk (2018–ongoing). “The artistic practice of walking came to her while researching the rise of suicide-bombing incidents in North-East Nigeria. . . . Unsure how to face such horror, she followed a path of information that led beneath the surface of what her eyes could perceive,” writes Aziza Harmel. In Tatsuniya (2017–ongoing), in turn, Gambo encounters the landscape, as well as the terror inscribed in the land since the attacks by the Islamic terrorist militia Boko Haram in 2013, in a poetic project involving students from the graduating class of a girls’ school in Maiduguri.

The focus of the contribution by Heba Y. Amin is Project Speak2Tweet, initiated in 2011, which she now reexplores ten years after the Egyptian government shut down the Internet in response to the escalating political protests. Together with Anthony Downey, Abdelkarim Mardini (a co-founder of the communication platform Speak2Tweet, established spontaneously back then), and the media scientist Adel Iskandar, the artist talks about the revolutionary promise held by social media platforms around the year 2010. With an eye to the pandemic, they further discuss increasing forms of digital surveillance and censorship, as well as the impact of the evolution of communication technologies on freedom of expression and democracy.

Christian Nyampeta explores in his work the possibilities of living together in a world characterized by differences. In an interview with Aïcha Diallo, the artist discusses his project École du soir (Evening School), which he has carried out globally since 2009 in different places and in the most diverse contexts. He talks about the importance of collaborative engagement with the experiences of the African diaspora, about the accessibility of contemporary art, the relevance of practices of (new) restoration, and the possibilities of dealing with the legacy of colonial archives in ways that are poetic but not always direct.