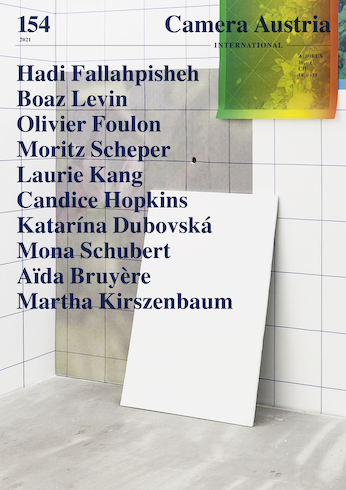 Presented in the issue at hand are artistic works characterized by hybrid media worlds and by approaches that field manifold media-immanent topics based on the immediate process of photography, while also probing the (post-)photographic dispositive, which is always embedded in the culture of the present day. A central point of focus here is the way of referencing the space in which photography takes form and is exhibited.

Presented in the issue at hand are artistic works characterized by hybrid media worlds and by approaches that field manifold media-immanent topics based on the immediate process of photography, while also probing the (post-)photographic dispositive, which is always embedded in the culture of the present day. A central point of focus here is the way of referencing the space in which photography takes form and is exhibited.

In the work of Hadi Fallahpisheh, the photographic process of exposure becomes a performative act carried out by the artist alone in the darkroom. The comic-like scenes so characteristic of his powerfully colored works do not immediately reference spatiotemporal constellations of reality, but rather inscribe themselves as “photographic drawings” into the light-sensitive surface of the photo paper. Arising here are scenes populated by “humanoid creatures,” dogs, cats, rats, and other characters, thus making violence, aggression, anxiety, and vulnerability visible in a way that is as comical as it is tragic. Boaz Levin localizes Fallahpisheh’s work in the tradition of slapstick and critical humor, which make the mercilessness of everyday life bearable in the first place: “In its alternate universe, Fallahpisheh’s act strikes a fine balance: distant enough to allow us to laugh at what is unjust and cruel, while also strangely, eerily familiar.”

Olivier Foulon, in turn, weaves a conceptual fabric in his works, remaining ever aware of the context of this fabric and the rules governing it. The artist attentively follows current developments and economic cycles in the field of contemporary art, picking up on intrinsic tendencies and integrating them, often with an ironic take, into his own artistic practice. Moritz Scheper differentiates Foulon’s approach from a mere “meta-game” of appropriation along with the related loop of (self-)reference, while pointing out the artist’s subtle strategies which actually underscore certain present-day tendencies. “Due to its cyclical embedding in an interplay with alien material, I understand Foulon’s appropriation as a tactic in line with Michel de Certeau: a dynamic, nearly indiscernible calculation that produces without amassing and subtly intervenes in the circulation of objects and discourses.”

Exploring and referencing each specific space in which her works are presented is something that preoccupies Laurie Kang as well. In the exhibition space, the artist installs long sheets of (consistently sensitive) photo emulsion paper along a supporting structure. Hence, over the course of time, the surrounding space becomes inscribed in the works of art, with the changes of light and environment becoming visible. Candice Hopkins considers time in Kang’s practice to be a medium which allows “evolutionary images” to emerge, associating this with the process of memory and its inherent gaps. “Over time, I understood that what Kang was working at by creating installations that generate the situation for processes (particularly photographic ones) . . . is forging open the space that so tightly binds memory to object and memory to image. In doing so, she suspends what we might anticipate finding in the spaces between.”

The memory of images likewise resonates in the practice of Katarína Dubovská, yet here viewers are confronted with fragments and traces of twenty-first-century visual culture, saturated in imagery yet ever more detached from indexicality. In her artistic process, Dubovská literally extracts, shreds, and mixes the ephemera of this culture, yet without in any way differentiating between the origins of the individual elements: prints, newspaper articles, screenshots, test prints, components of earlier works, and so forth. Mona Schubert identifies in this approach the “crisis of representation” which was triggered by the transition of photography from the analogue into the (post-)digital. “It is no longer the traditional photographic print in the sense of a ‘frozen slice of the past’ that is central to her artistic examination, but rather the ‘inherent undecidability’ of the networked image and the socioeconomic, political, and ecological implications connected with it.”

Aïda Bruyère develops her work from photographs she shot herself as well as from imagery which she culls from heterogeneous sources, transforming and multiplying them, and immersing them in new contexts in the form of publications, videos, or wall installations. Indeed, Bruyère’s artistic practice has been strongly shaped by her upbringing in Mali. Her work bears traditional forms of expression from Malian culture, along with manifestations of global pop culture conveyed through music, club culture, fashion, and reality TV. Martha Kirszenbaum sees Bruyère’s work as being primarily rooted in the context of intersectional feminism and the empowerment of young Women of Color. “Yet her work bears a consciousness of her white privilege, if not gaze, and conveys a strong feeling of being an inside-outer—in Mali, she was a young white girl raised within a postcolonial African society.”

This issue’s Forum can be viewed as a photographic heightening and continuation of the exhibition nothing ever happenend (yet), developed in recent months by Maren Lübbke-Tidow together with students from the College of Fine Arts at Berlin University of the Arts. It was on show at the Museum für Fotografie in Berlin through the end of May 2021. The project was conceived as an expression of a movement devoted to searching, which revolves around both political dedication in a time of global conflict marked by upheaval and the question of which certainties photography is still able to embody in the digital present, that is, whether and how social reality can even be made (photographically) visible in this context. The six artistic positions introduced here illuminate heterogeneous approaches to accessing this struggle. “In fact, they provocatively toy with the potential of meaning ascriptions which disrupt premature assertions.”

In parallel to this issue, we are conducting a reader survey, which you can access via the Camera Austria website. Since the field of contemporary photography is constantly changing, evident not least in the contributions to the present issue, we would like to invite you to now, after over 150 editions of Camera Austria International, take a moment to help us think about the format of the magazine. We would be very pleased if you were willing to take ten minutes to participate in this survey and thus to provide important impetus for the continued development of the magazine.

We’re looking forward to receiving your feedback and wish you a very enjoyable read of Camera Austria International No. 154.