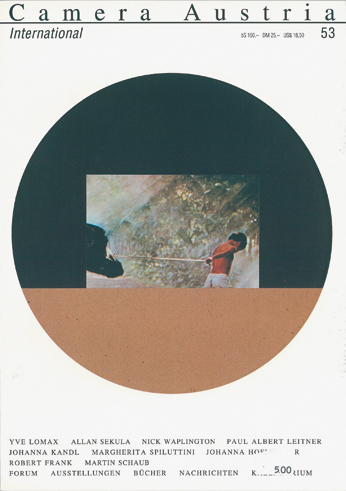 What has emerged as a point of focus in this issue, the one winding up our 1995 programm, is neither a specific concept nor a theme but rather a particular working procedure. The contributions document long–term projects dedicated to the representation of–social, political, economic – complexities. Photography’s role as a medium reflects the fact that we are not dealing with clear-cut subjects but with complex conditions or combinations of circumstances.

What has emerged as a point of focus in this issue, the one winding up our 1995 programm, is neither a specific concept nor a theme but rather a particular working procedure. The contributions document long–term projects dedicated to the representation of–social, political, economic – complexities. Photography’s role as a medium reflects the fact that we are not dealing with clear-cut subjects but with complex conditions or combinations of circumstances.
In her first essay published in German, Yve Lomax takes up the crisis of representation, a problem confronting contemporary image production in general. For Yve Lomax, this crisis is a reason to ask once more what images are capable of, what relations they can form, what effects and affections images can generate in the world. Her series of work in this issue is centered around the potential of any image to generate multitude of effects. In “Fish Story”, a six–year project, Allan Sekula is developing a cross–section through the social, cultural and economic–political history of (post-) capitalist society represented by the shipyard, fishery and fish processing industries. “Walking on Water” is part of this work in progress which is laid out as an open archive of images and texts and has not been published so far. Since 1986, Nick Waplington has been photographing a family of friends in the housing estate on the outskirts of Nottingham where his grandfather lives. “Living Room”, as his project is titled, simultaneously describes a particular private sphere and a section of the British (post-) social system. In his photographs, a family’s living room becomes a metaphor of social and cultural conditions, ways of live, value systems and survival strategies.
In Johanna Kandl’s project “Not Coming Full Circle For a Long Time to Come”, the withdrawal of Russian Army troops from Germany is the subject of a photographic investigation aimed simultaneously at individual and collective consequences of this event. Together with the photographer Margherita Spiluttini she made a series of photographs. They served as raw material of an installation discussed in an interview with Johanna Hofleitner. Paul Albert Leitner who was awarded with the Rupertinum Award of Photography in 1995 continues his excursion about travelling in “Vienna: Moments of a City” – leisurely strolling, so to speak, through the public sphere of a metropolis. Writing about Robert Frank, Martin Schaub focusses on the artist’s film œvre, attempting to reconstruct the (autobiographic) relation between author and images.
The length of the contributions and of reports about recent exhibitions and books has not only affected the strength of this volume which, with 130 pages, is almost a double issue, but also the production time. We intend to shorten this time in the future to meet subscriber’s interest. As you can see from the imprint, we have moved into new and larger premises which will also mean more efficiency. Another change in our work: Christine Frisinghelli has been appointed director of styrian autumn until 1999. She will, however, continue to be involved in editing this magazine. For the next issue we expect contributions from and about Trude Fleischmann, Louise Lawler, Michael Schmidt, Günther Selichar and Diana Thater. Camera Austria will again be represented at “Art Frankfurt”, this year. For the first time, we will have a gallery stand – do come and see us there! We also gladly announce that the 1995 “Camera Austria Award for Contemporary Photography of the City of Graz” went to the South African photographer David Goldblatt.