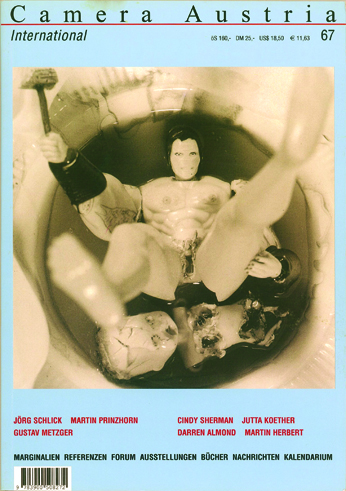 While preparing our last issue, CAMERA AUSTRIA No. 66, which was dubbed “Scene of the Crime” and included an essay by Diedrich Diederichsen that focused on the question of political memory through photographs, we came across the recent work of Gustav Metzger (born 1926). Known in the Sixties for his manifestos and “lecture-demonstrations” of his auto-creative and auto-destructive art (ADA), Metzger’s political involvement and uncompromising criticism of the art business led him, in 1977, to call for an “art strike.” In the end, however, he was perhaps the only one to set aside artistic production in favor of reflection and theoretical activity.
Metzger’s currently increasing presence is the result not only of the advancing art-historical reappraisal of artistic manifestations of the Sixties, but also of his turn to a new field of artistic involvement: his “Historic Photographs” series. Here he dedicates himself to pictures that deal directly with 20th century political history, from documentary photography of the time of National Socialism, to war within and over Israel, terrorist bombings, and recent events in former Yugoslavia; images of horror, the peaks of destruction and chaos.
Metzger has agreed to the publication, in this issue, of a previously unpublished manuscript – the first draft of “Historic Photographs”, which he originally intended to put on show bearing the title “Killing Fields.” His conceptual reasoning is made clear in the text. He strives to reshape the form of exhibition and artistic work; to recreate the possibility of artistic communication of historic events, the perception of which the mass publication of press photography has virtually made impossible. The realization of this concept in diverse installations shows views of the “Historic Photographs” at the Spacex Gallery in Exeter, the Musée d’Art Moderne de la Ville de Paris, the Kunstraum München, the Museum of Modern Art in Oxford, and the Kunsthalle Nürnberg, which all serve to illustrate Metzger’s text. Icons of press photography are initially removed and concealed in sculptural works – contextually related to the event depicted – by “covers”, some of which to be revealed by the viewers. The sphere of experience that emerges from the exhibit provides the means for a new approach to these photographs that comes with uncertainty for the viewer, but also a delay in perception that makes it possible to reflect on the history of a violence-laden century.