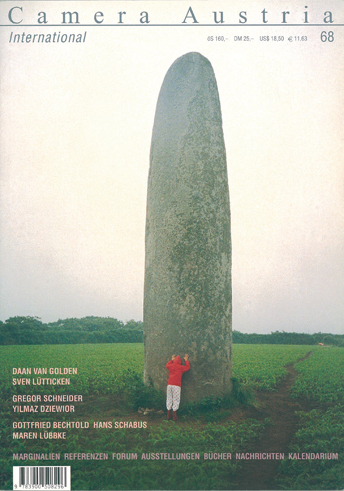 CAMERA AUSTRIA No. 68 features a range of artistic positions that all have something in common: in their photographic work, all four artists – Daan van Golden, Gregor Schneider, Hans Schabus and Gottfried Bechtold – describe the experience of space. Now, of course, one might be tempted to say that this applies to all art work. But the important aspect here, we feel, is that space is regarded as a category that cannot necessarily be tied back to concrete local conditions but which is far more aptly described as a subjective space of experience or memory.
Gottfried Bechtold and Hans Schabus subscribe to a conception of sculpture according to which the work need not be manifested as a local entity; the important aspect is rather the experience of space as an experience of time. This approach leads to an interdisciplinary use of artistic means; for example, both artists work with the media of photography and film as well as video. Both the exhibition – which opened at the Galerie CAMERA AUSTRIA in September – and the contribution to this issue were created in connection with the “fotoprofile” project which the Arts Section of the Federal Chancellery had launched to mark the tenth anniversary of photography patronage in Austria. Our interest was not in presenting works that already feature in the extensive national collections, but rather in demonstrating the meaningfulness and necessity of public promotion of artistic and institutional work in the field of photography by example of this collaboration between Gottfried Bechtold and Hans Schabus. This project, then, initiates a dialogue between different generations of visual artists and a discussion of contemporary artistic positions.
The basis and focal point of Gregor Schneider’s work is his legendary “Haus u r” in Rheydt. For fifteen years, the artist has been building walls in front of walls with the effect that it is no longer possible to reconstruct the original state of the house. This is a work that, although absolutely bound to the concrete place, in fact reaches beyond this place. For Schneider himself, his work on construction of the “Haus u r” is a kind of idling of activity, a “killing of economy”. In this sense, the work does not trigger a process that seeks to achieve a specific aim, but rather a self-referential process. But Schneider also shakes the viewer’s apparatus of locomotion and perception with his often minimal interventions, subtly confronting him with his own fears and his own repressed violence.
In the mid-eighties, Henk Tas brought to our attention the influence of Daan van Golden’s work on the younger generation of Dutch artists; since then, we have wanted to present his works in CAMERA AUSTRIA. Van Golden has decided to compile a series of images from his complex painterly and photographic work which centre on his daughter’s growing up and which release landscapes / spaces of memory.
The German concept artist Hans-Peter Feldmann is the winner of the 1999 CAMERA AUSTRIA PRIZE of the City of Graz for international photography. This biennial award, presented by the City of Graz in recognition of the international importance of the magazine CAMERA AUSTRIA since 1989, is endowed with a prize-money of ATS 200,000. The award was presented to Hans-Peter Feldmann on Friday, 3 December, 1999, at the editorial offices of CAMERA AUSTRIA during a presentation of his artist books.
After concluding her function as director of the steirischer herbst festival at the end of 1999, our chief editor Christine Frisinghelli will again be devoting more attention to CAMERA AUSTRIA, focusing her work in future on exhibitions, symposiums and mediation. We are very pleased to have her back!