Art Is Concrete. And So Is Truth? 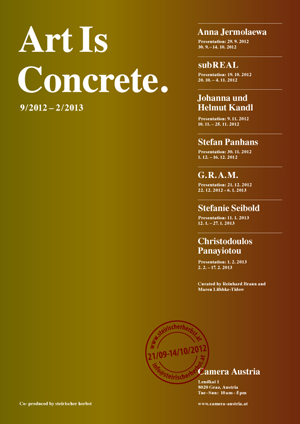 The leitmotif of the steirischen herbst – “Truth is concrete. And so is art?” – is actually reversed. The “real” world and its “real” politics are offset by the reality of artistic representations, along the lines of Jean-Luc Godard, who in 1967 asserted: “Art is not a reflection of reality. It’s the reality of a reflection.” Does this not mean that representation itself sometimes takes on the shape of reality?

Seven consecutive representations address the photographic images as involved within various fields of action, at the same time constituting the image and going beyond the image: research, stories, media regime, public space, staging, montage, political agitation. With every new presentation we ask the artists to invite guests for performances, readings, debates, lectures, inventing or abolishing debates. Changing spaces of hypothetical and at the same time mandatory statements are being created, interventions within regimes of production of meaning in between art, politics, everyday life, an “aesthetics of manouvres, of polymorphous situations, amusing discoveries, poetic as well as militant« (Maurizio Lazzarato) Okwui Enwesor recently writes about the relationship between image and representation (wich is still crucial to any debate on photography):“it also assumes an exploration into the derealisation of such images through the optics of art inquiry. Central to this inquiry is the problem of interpretation, as the production of images is always political in terms of distribution and the control of visibility. How do artists take a critical stance?” “The resistance of the work is not art’s way of rescuing politics; it is not art’s way of imitating or anticipating politics – it is properly speaking their identity. Art is politics” (Jacques Rancière). Art, therefore, is not political because of its themes or statements, but instead through its intervention into regimes of meaning ascription within a space of common affairs, where forms of art are not distinguished from common experience: as a type of reality itself.