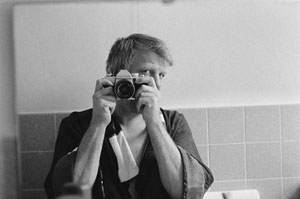 As a writer, photographer, theatre director often treated with hostility, set designer and film-maker, Einar Schleef presented an extensive, at times polarising oeuvre that reflects his biography – life in divided Germany: “What Schleef writes, paints, stages, is still marked by the GDR situation: hard, cold, inalienable. Anyone who wanted to find himself had to resist prescribed forms and find his own language. […] Clarity, raising a monument to the self made hard. And to that world that is now waning.” (Günther Rühle, Schleef oder Die Vielfalt, in: Republikflucht. Waffenstillstand, Heimkehr. Berlin: Argon 1992.)
Einar Schleef (born in Sangerhausen/Harz in 1944, died in Berlin in 2001) developed the concept for the “Kontaktbögen” exhibition in 1999 when he was compiling, commenting and editing his diaries (of which the first two volumes, 1953 – 1963 and 1964 – 1976, have already been published), that would become the focal literary project during the last years of his life. The concept follows the artist’s life chronology and is divided into chapters on specific subjects within this timeline. Unlike previous Schleef exhibitions – e.g. “Republikflucht. Waffenstillstand. Heimkehr” (Akademie der Künste Berlin, 1992) – that combined writings, painting, drawings and photography, and whose settings Schleef always designed himself – this exhibition focuses on his photographic works, granting the first ever insight into his complete archive.
Reading Schleef’s photographic works in a biographical context would seem to suggest itself, particularly in view of the fact that his subjects are always linked to people important to him (his girlfriend Gabriele, his mother) and the places of his work: Sangerhausen, East Berlin (among other things, he took photos of deserted Russian barracks there), West Berlin (where, for example, he described a portrait of the tree outside his window and its disappearance in the chapter entitled “Der Baum”, the tree), Frankfurt (his father’s birthplace and first location of his theatre work in the West, where he documented a suicide on the underground), Denmark, New York.
He also proposed the title itself, “Kontaktbögen” (contact sheets), and indeed the exhibition presents numerous contact sheets that illustrate his photographic approach: “I always work in series, because it is important to me to capture situations in their development.”
Schleef started taking photos in 1965 while studying at the School of Art and Design Berlin Weissensee. His first series of photos demonstrates his interest in and affection for his old neighbours in an East Berlin block of flats, while at the same time he documents shop windows in Berlin, a subject that reminded him of the shortage in his childhood years and that fascinated him thereafter. As of 1970, he began to create a portrait of Sangerhausen, his mother’s birthplace and his home town, publishing these pictures in the book of photography called “Zuhause” (home) in 1981, that Schleef preceded with the following words: “Never back again, get over what suffocates and eats you up and flee until you have a home of your own.” This book was published between his first two written publications, “Gertrud I” (1980) and “Gertrud II” (1984), a monologue about his mother, who features in the exhibition in a touching chapter called “Mutter Tod” (Mother Death).
The “Kontaktbögen” exhibition was carried out by the Akademie der Künste in 2006 on the basis of sketches by Einar Schleef and curated by Regine Herrmann. It is a great honour for Camera Austria to present the photographic work of Einar Schleef in an exhibition once again; we already showcased the series of photos entitled “Zuhause” in 1983 – at Forum Stadtpark – in what was the very first exhibition of this singular artist.