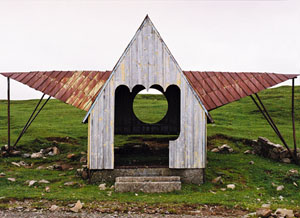 “You are here”: This phrase is used whenever something is marked from the outside, whenever a certain point in a specific frame is highlighted and pointed out.”You are here” puts a finger on a spot already mapped in the landscape, perhaps in order to underline the specificity of the marked site, but also perhaps in order to be able to point out paths and destinations starting from here. In any case, however, “You are here” not only implies a topographic determination within a given network of co-ordinates, “You are here” also conveys a kind of assurance by a third person with regard to your current location. Like a draft for a map, illuminated at certain points, this exhibition, “You are here”, is also a collection of (photographic) place explorations. But here, doubt is cast on the credibility of a description of a location and the approach to “place” as a variable that may be mapped on the basis of whatever supposedly objective criteria: In this case, rather, space is questioned in terms of structure by adding not only social, economic and political parameters of specifying places but also by discussing our own, in some cases explicitly subjective approach to the various spaces being explored. The various place explorations and the associated different allocations, that allow the places visited and investigated a new dimension of perception, are presented in a total of seven different positions:

Landscapes and urban views created en route to the Aral Sea in Kazakhstan reveal traces of political and economic upheaval, that Christoph Grill documents in his travelogues.
Karina Nimmerfall visits supposed crime scenes in New York that play a role in the popular US television series “Law and Order”; in “Cinematic Maps” she contrasts the real places with her fictitious allocations.
Rural scenes photographed in the Zemo Achara region, close to the Turkish border in Georgia, describe almost archetypal types of construction and life-styles, that Marika Asatiani has explored in her “Achara Untitled” project.
Residential buildings in a garden city and their inhabitants, photographed in Skien (Norway) by Verena Winkelmann: Stable, orderly small-town habits in the modern welfare state.
An artificial waterfall in Umbria, the theme of countless idyllic landscape pictures, gives Sylvia Henrich occasion for a project on the relationship of nature as an artificial creation, ideal projection surface, but also energy resource.
Andrea Witzmann presents living space as a variable construction kit with her works created at her Paris studio: In everchanging experimental set-ups, with the aid of the found furnishings, a kind of appropriation process takes place.
The method employed by SofijaSilvia could be described as a meandering movement through space: The photographer as an unnoticed observer, who doesn?t disturb the place she traverses in any way, occupying it only for a short time, and in whose field of vision everything visible enters into a temporary relationship.
Many of the projects presented here have already been published in Camera Austria magazine, that (above all for young artists) has become a trans-local platform beyond local scenes and borders.
The exhibition is a project jointly curated by the Camera Austria team. Christine Frisinghelli, Tanja Gassler, Maren Lübbke-Tidow, Margit Neuhold, Manfred Willmann