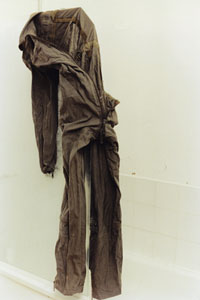 The special thing about Wolfgang Tillmans’ artistic work is not only his use of the single photographic image with its particular formal/compositional properties and qualities, but above all the artist’s method of recombining different images and different subjects to create a kind of display. Both his numerous (artist’s) books previously published and his installations thrive on this “putting in one” of very different pictorial genres. Here, the equality of motifs becomes manifest as a strategy and principle. In Tillmans’ work there is no superficial conceptual-thematic frame that makes a certain ordering of his pictures or specific hanging scheme appear mandatory, on the contrary: Constantly developing new varieties of presentation in which older and newly created photographic material is combined to create ensembles is a leitmotif of his artistic practice.
From the beginning, Wolfgang Tillmans worked parallel in a wide range of media and institutional contexts. At the end of the 1980s, he published series of photos for (lifestyle) magazines, at the same time exhibiting in the gallery context, followed shortly afterwards by shows at international exhibition centres and numerous (artist’s) books and catalogues. These presentations in different media contexts are also interesting in connection with this: Here we see the essence of a profoundly human interest in understanding social experiences or details of reality, to find oneself in them, and to wish to find an image for them. On the other hand, however, we also see the essence of an artistic attitude towards constantly questioning and processing the possibilities and the status quo of art itself through his own work.
In his first solo exhibition in Austria, Wolfgang Tillmans also presents an ensemble of works composed for Camera Austria’s exhibition room that is in keeping with his artistic practice; the ensemble not only demonstrates the whole range of his pictorial themes and motifs but also visualises his interest in the photo as material (that may also be experienced haptically). One focus of the exhibition will be on this aspect in the form of the recent abstract works. Tillmans is interested in the physical processes and different methods that are fundamental in creating a surface structure or image structure: Particularly in his abstract (sometimes cameraless) photography, he thus underscores the materiality of his work and paper as an image carrier of visual perception. The different modes of presentation emphasise the material orientation and the objectual character of his recent works. In the recently created “paper drops”, he widens his focus to this aspect of his work: Here he explores (photo) paper as a cover, as a carrier medium that includes colour.
On the one hand, the experimental aspect that these works may convey represents a constant factor in Tillmans’ photographic work (that began with experiments with different forms of enlargement and reproduction), but must not be viewed as being reduced to this formal aspect. For experimenting with and repeatedly verifying what has been learnt presents itself as a fundamental paradigm of Wolfgang Tillmans’ artistic work: Allowing himself an ever changing approach to his own work and to art is the outstanding quality in this multilayered artistic project. It is an open oeuvre, characterised by constant work on the basis, beyond any grand theorems or finished statements, guided by a “strategy of doubt”. By means of his work, he engages in a form of constant questioning and (self) assurance in which he continues to re-negotiate social, political, religious or genderspecific realities. At the same time, he is also constantly examining the artistic devices, the photography medium itself, with regard to their possibilities, constantly questioning art itself and its possibilities. Although the work is so profoundly conceived as a kind of ongoing test procedure, both in itself and in its interplay with others, Tillmans often surprises by ultimately creating perfectly matched montages of his very different pictures and topics in three dimensions.