First the artist defines meaning.
On the Conceptual Paradigm 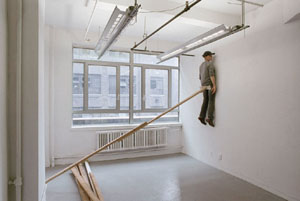 First the artist defines meaning* The quotation that lends the exhibition its title describes at different levels the fields of interest that have accompanied preparations for this exhibition: on the one hand the aim is to show what methodical approaches a younger generation of visual artists adopt towards their subject fields, all of them – and this is a common aspect in the selection of the art works – based on conceptual considerations. In a scrutiny of the strategies of Concept art of the 1960s and 70s, that were initiated in the course of opting out of the picture, overcoming the object, and commercialising art, we observe a fundamental relationship of tension between method and aesthetics, that currently induces many artists to work through issues once again that were already the focus of historical concept art. On the other hand, considerations about this exhibition were accompanied by the question to what extent models and ideas – such as concept or neo-concept – have become firmly established at the level of describing current artistic positions, without being put in more concrete terms. Today, concept and conceptual methods in contemporary art production do not so much describe a specific artistic method, as developed by historical Concept art with its (formally) stringent methods, but above all arouse associations with the aspect of medium-critical and system-critical and reflective work. But it is precisely this form of diversification, that today keeps the conceptual available as an artistic strategy for a wide variety of media usages and formal solutions, that tempts us in the current debate to overuse or broaden the term (neo) concept. In addition, working through a central paradigm of twentieth-century art – conceptual strategies – also demonstrates the complex link between image and text, image and pictorial knowledge, reception, context and aesthetics, and the constant necessity of a conceptual and theoretical (re)definition of current image practices.

First the artist defines meaning. On the Conceptual Paradigm

Then the work takes place, this is how Dan Graham continues with the description of Sol LeWitt’s artistic practice: and yes, ultimately “First the artist defines meaning*” sets out to open up a space for artists and their works, whose common aspects are not only the methodical points of contact with conceptual strategies and thematic continuation, but which, in addition, construct new levels of meaning and ways of seeing by reworking different local conditions and spatial situations.
“First the artist defines meaning*” showcases artistic positions that are determined by a questioning of dispostifs of representation, representational conventions, paradigms of narration, reception and also politics. The artists break away from specific aesthetic allocations to ask about specific (also political and image-political) attitudes.
With different formal and media-specific strategies, they re-question and re-formulate specifically connotated spaces and places / architectures and culturally coded parameters of spaces / places in processes of re-photographing (Joachim Koester) and re-contextualising (Ralf Hoedt, Peter Piller), in processes of re-ordering partially historical material and associated framework data (Ralf Hoedt, Peter Piller, Christine Würmell), in models of measuring and transforming (Six & Petritsch) and breaking up (Miles Cooldige) space. This also demonstrates the wish for a geographical, institutional and political, economical change of paradigm.

The exhibition thus depicts a fundamental, ongoing occupation with those contemporary art productions that operate in a media-critical and in a political context with their work. Finally, the statement that it is first and foremost the artists who open up a space of meaning, also opens up a perspective on art that brings the theoretical potential of the works themselves into play, attempting to question the contexts of production and reception once again.