I am not afraid. The Market Photo Workshop, Johannesburg 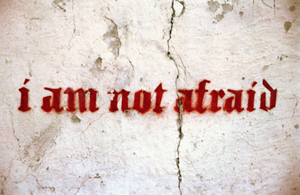 NONTSIKELELO VELEKO, I am not afraid, Louis Botha Ave, Johannesburg, aus: The ones on top won't make it stop!, 2002. Courtesy: The Goodman Gallery, Johannesburg.

With this project we are celebrating the publication of CAMERA AUSTRIA No. 100. Since foundation back in 1980, we can now look back on almost thirty years of continuous work in which we have used our magazine – along with our exhibitions and symposia – to engage in an artistic, theoretical and journalistic exploration of photography in the context of contemporary art, and on discourses in which we have interfered and in which we will continue to participate.
The 100th issue of Camera Austria picks up one of our magazine’s main programmatic threads: to reflect on the social uses of photography, directly to support artistic production, and to offer a platform particularly for the youngest movements in contemporary photography and media art. In order to visualise our latest projects in the context of our editorial and curatorial decisions since 1980, and particularly in order to offer our more recent readers an insight into the artistic and theoretical debates, we are also taking this opportunity to publish an Index of Camera Austria issues No. 1 – 100.

I am not afraid. The Market Photo Workshop, Johannesburg

The exhibition
“I am not afraid. The Market Photo Workshop, Johannesburg” In our anniversary issue of Camera Austria No. 100, we intentionally wanted to refrain from looking back on past decades, i.e. our own history, and decided to look to the future instead. We dedicate this issue – that accompanies the exhibition of the same name – to the Market Photo Workshop founded by David Goldblatt in Johannesburg at the end of the 1980s. This exhibition presents works of graduates of this school of photography located in Johannesburg, that was already run independently of race during the Apartheid era. As an institution, the Market Photo Workshop has not only brought forth outstanding artistic projects but also offered and offers young people their first real opportunity of training. The exhibition and publication focus on situations of life in South Africa after the end of Apartheid, asking questions about the profound social transformations that have taken place in this country. The aim was to collect positions from the different generations of graduates from this school, that have emerged from the tradition of committed documentary photography and that tackle such issues as violence, different sexual politics, and economic niche work head-on. The individual presentations of documentary photographers – Jodi Bieber, Bonile Bam, Zanele Muholi, Nontsikelelo Veleko, and others – are supplemented by themed projects that – often over an extended period of time and in collaboration with people actually affected – explore such topics as migration, homelessness or health policy, but also questions of representation, memory and identity in a complex multi-ethnic society. The commitment of the Market Photo Workshop in the sense of political education aimed generally to combat visual illiteracy is of particularly interest: In “outreach projects” students and graduates of the Workshop are employed as tutors for temporary workshops in order to make work with photography as a way of describing one’s own environment accessible to different sections of the population, and thus to increase awareness of the way in which media images work.

CAMERA AUSTRIA NO. 100
Camera Austria No. 100 acts as an accompanying catalogue. In addition to the above-mentioned positions and project documentations, a number of authors provide insights into artistic and socio-political analysis with / of photography in South Africa: David Goldblatt and critic Joyce Ozynski (both from the generation of Workshop founders) provide an introduction to the historical context of its foundation and describe the hopes and intentions that were attached to the Workshop from today’s standpoint. Historian Patricia Hayes relates contemporary documentary practice in South Africa to the committed activism of the anti-Apartheid movement, explaining how substantially photography contributed to social reformation in this country. Photographer John Fleetwood, current head of the Market Photo Workshop, reports on the possibilities and functioning of an independent education centre in modern South Africa. Art historian Rory Bester introduces us to the documentary practices of contemporary photography in South Africa and to the published works showcased at the exhibition. In a conversation between photo artist Jo Ractliffe, photojournalist Peter McKenzie and critic Sean O’Toole, we learn about the different artistic attitudes and common ethical principles in the battle against state violence and discrimination.

SYMPOSIUM The symposium provides an insight into the history and structure of the Market Photo Workshop: Lectures by John Fleetwood; Zanele Muholi; Nontsikelelo Veleko.
Another lecture presents the winner of the 2007 Camera Austria Prize of the city of Graz: Marika Asatiani from Georgia talks about her work.
In her lecture, finally, Herta Wolf from Duisburg-Essen University will examine changes in photography, specifically discussing positions that have played a key role in the editorial practice of Camera Austria in past decades.