In the frameworf of:
Art Is Concrete. And So Is Truth? 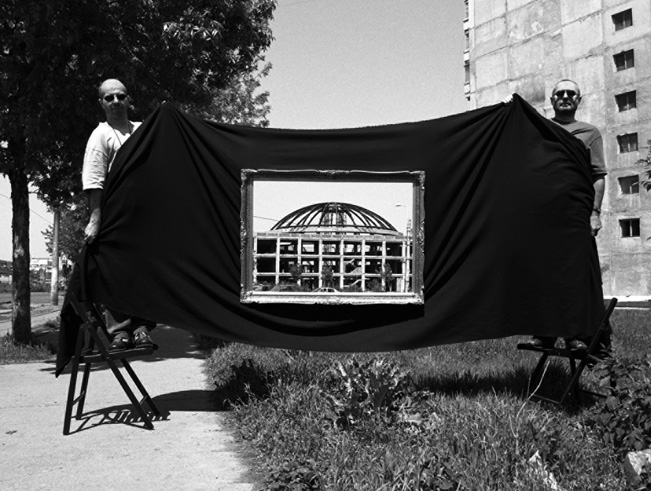 Our work with photographic data has been always defined by chance. Chance brought us together as staff members of Arta magazine; chance made us the rescuers of the 700 kg bulk photo material accumulated there between 1953 and 1990, and discarded by the publisher in 1993, at the termination of the publication. It is still by chance that we ended up with all that stuff in a studio at (the old) Künstlerhaus Bethanien in Berlin, and lived there surrounded (and sometimes literally covered) by it for a whole year. And it was definitely chance that helped us understand the thrilling relation between the negatives and the prints—a relation unique to this material. From there on we started to exploit chance, and what was initially an amorphous body of data became an ongoing strive towards archiving. As any game of chance is opened to the future, every attempt at archival order looks towards the past, and is inevitably tainted by melancholy.

“Dataflow” speaks about a delicate balance act between random events challenging the intuitively creative mind, and material accumulations feeding the analytical brain in its lust for clarity. It is a piece of fiction in the sense that there was never a teleological implication to our modus operandi, no concentration on a specific goal and no aspiration for coherence. But “Dataflow” is at the same time a rather accurate rendition of an epiphany.

In the fall of 1999, Vienna became the center of our focus, and with a sense of urgency we looked around for ways of capturing the city within the limited work frame at our disposal. And so we came to the realisation that a coherent—almost tangible—path was actually followed by us from the pile of boxes with photos shipped to Berlin, to the series of “Art History Archive” events organised in our studio there, to the discovery of the boxes with the 6 × 6 negatives, to the “Serving Art” series developed at Schloss Solitude in Stuttgart. It was probably a faithful thing that a CITY was the catalyst of the crystallisation process that led us from the intuitive play with visual data to the coherent data production visible in “Interviewing the Cities”. While the “Archive / Serving Art” series were taking the fundamental modernist concept of objet trouvé to another level, “Interviewing” became a complex web of places, stories, characters, and unspoken side events—a piece of virtual urbanism in its own right.

So came to life “Dataflow”—a survey, a look back, but also a map for possible future wanderings.